Since the 1960s, University of Maryland students have been extremely vocal in advocating for peace. The largest peace protests occurred on campus in 1970, when the National Guard was deployed to curb a massive anti-Vietnam War protest staged by students on Route 1 and McKeldin Mall. Since the 1970s, students have been active in protesting war and acts of violence, including the Gulf War in the 1990s and the ongoing Israeli-Palestinian conflict. 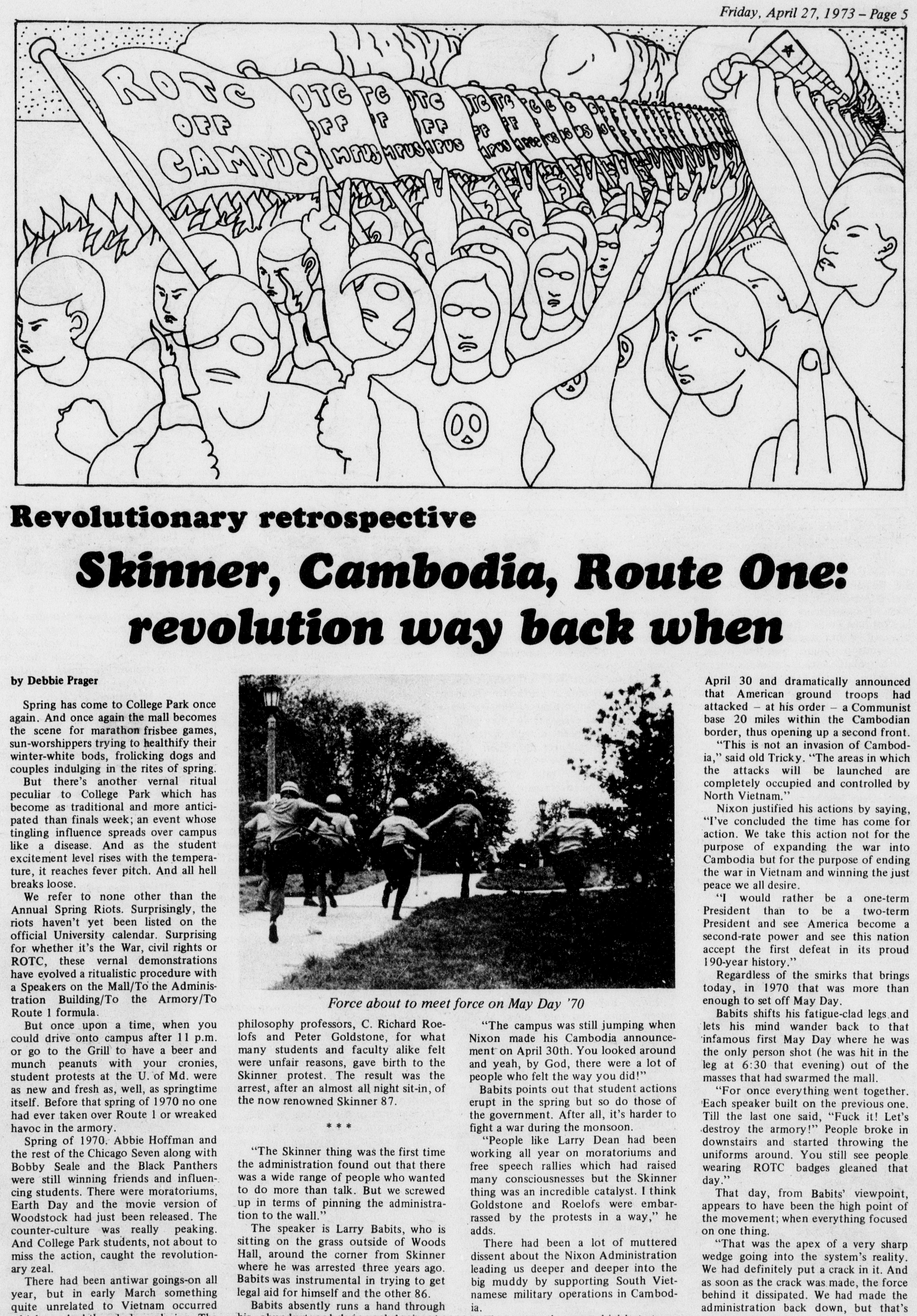 1973 - Description of the events of spring 1970, when students protested the Vietnam War. In May 1970 students held sit-ins at Skinner Hall to protest the war and also marched on Route 1. The Maryland National Guard was called in and clashed with protestors, using tear gas to disperse the protests. 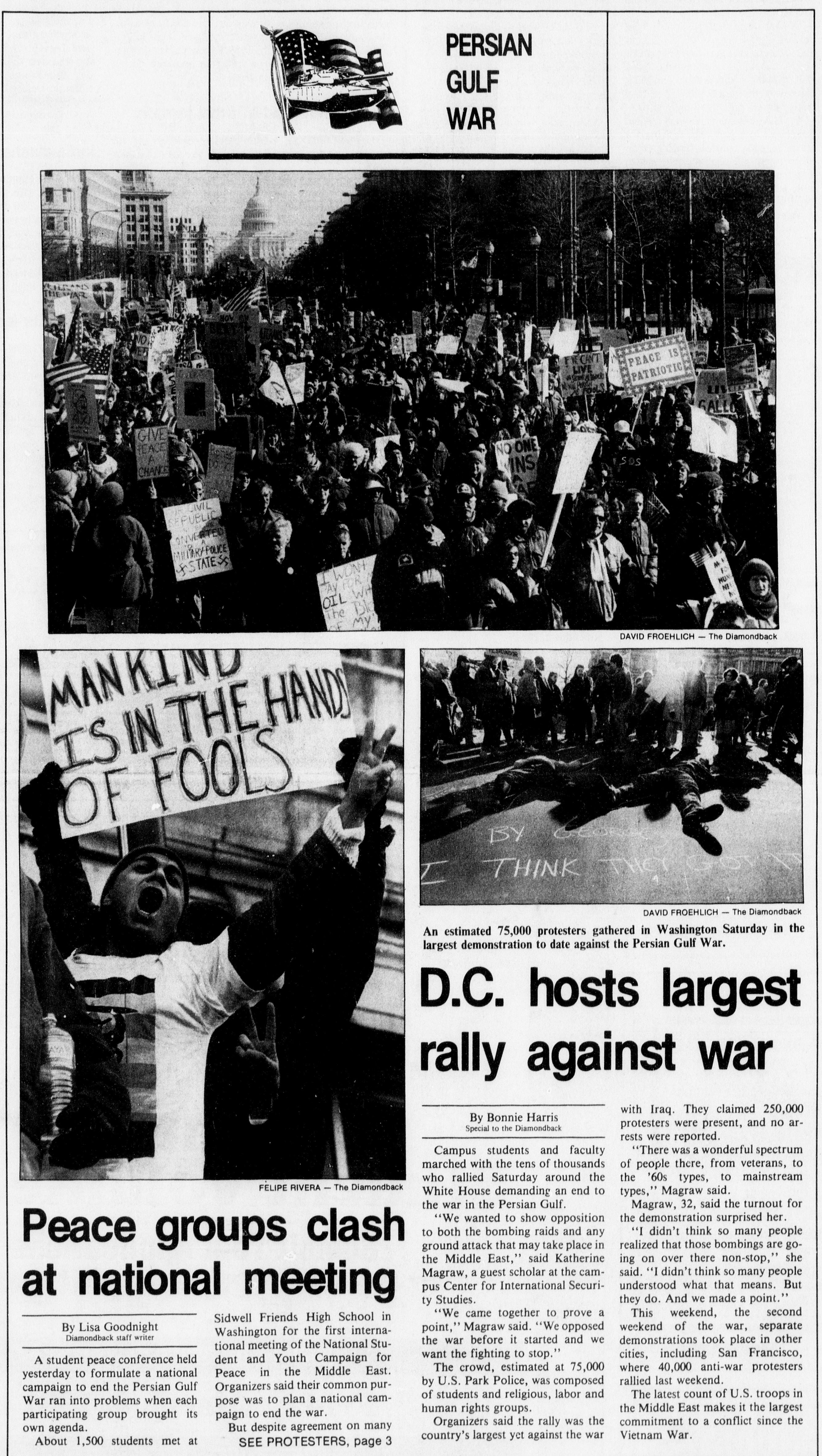 1991 - University of Maryland students, staff, and faculty joined a D.C. protest against the Persian Gulf War. The protest consisted of 250,000 people, many of whom came with student, religious, labor and human rights groups. 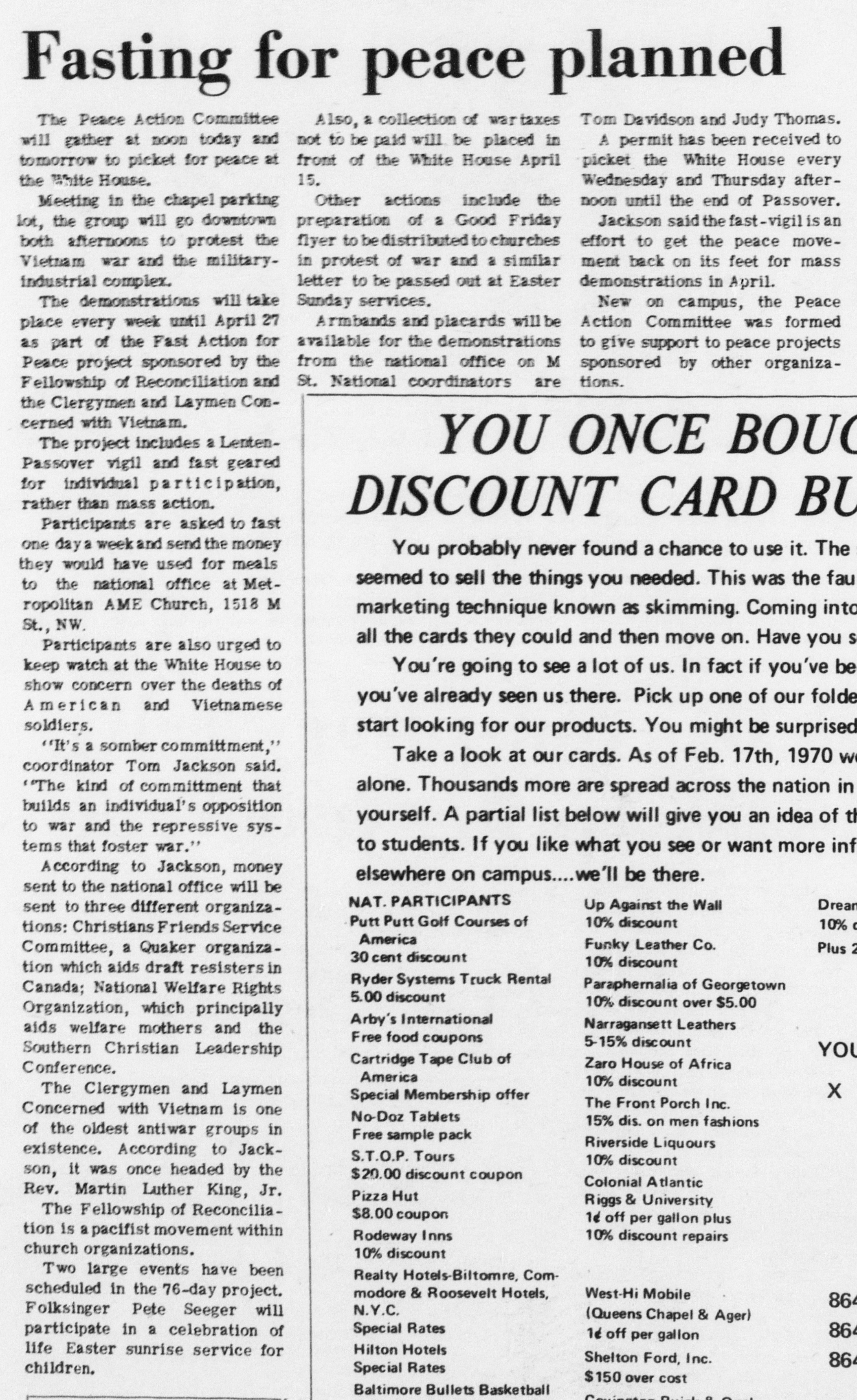 1970 - The Peace Action Committee joined the national Fast Action for Peace project, which involved fasting and rallying in D.C. in protest of the Vietnam War and the military-industrial complex. 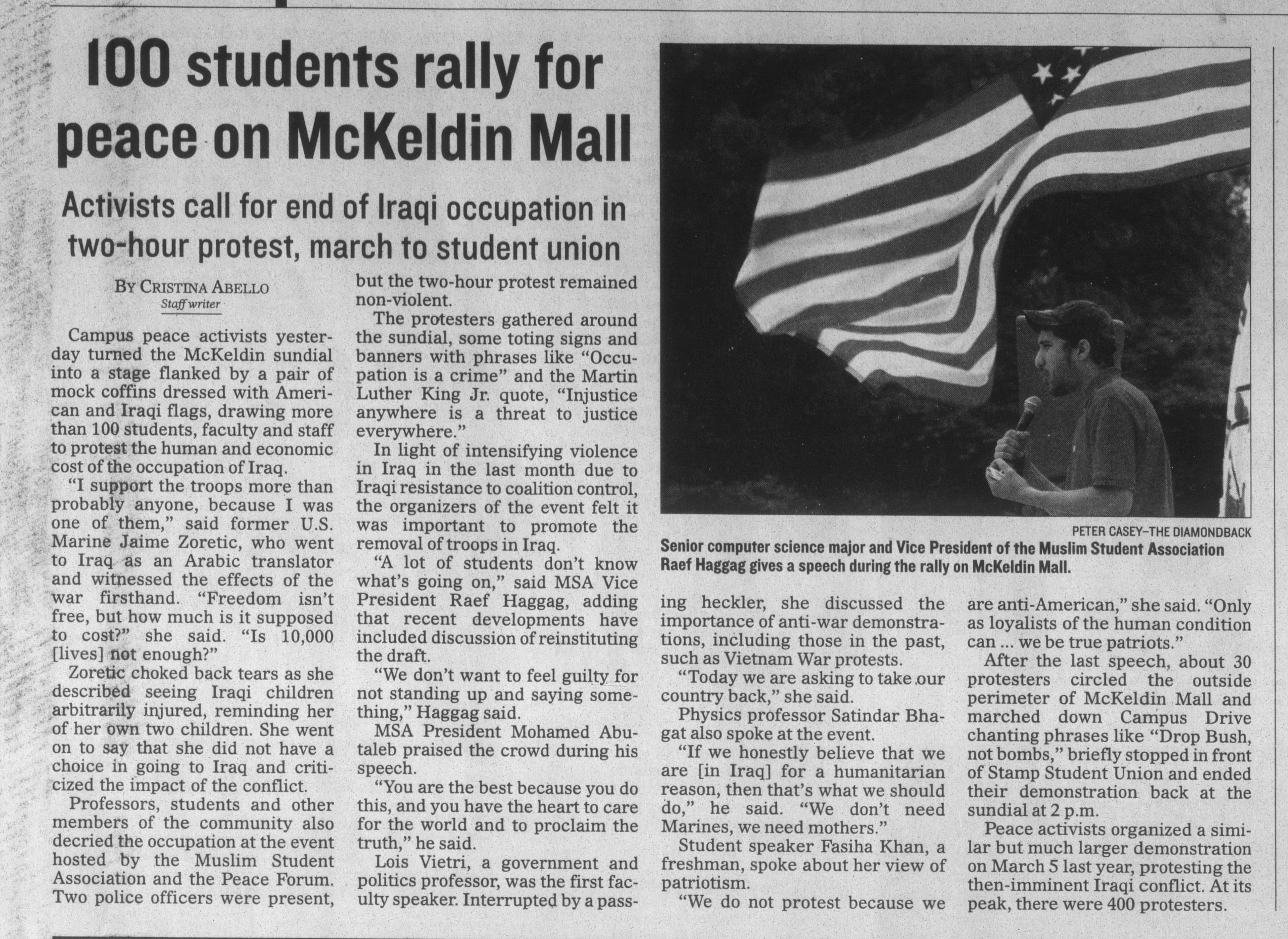 2004 - Campus peace activists hosted a rally on McKeldin Mall. They hoped to raise awareness of the human and economic cost of the occupation of Iraq.

1972 - Students marched between Reckord Armory and President Elkins’ house to protest the continued war in Vietnam as well as the ROTC program on campus. A significant police force was sent to quell the protests and two students were arrested. 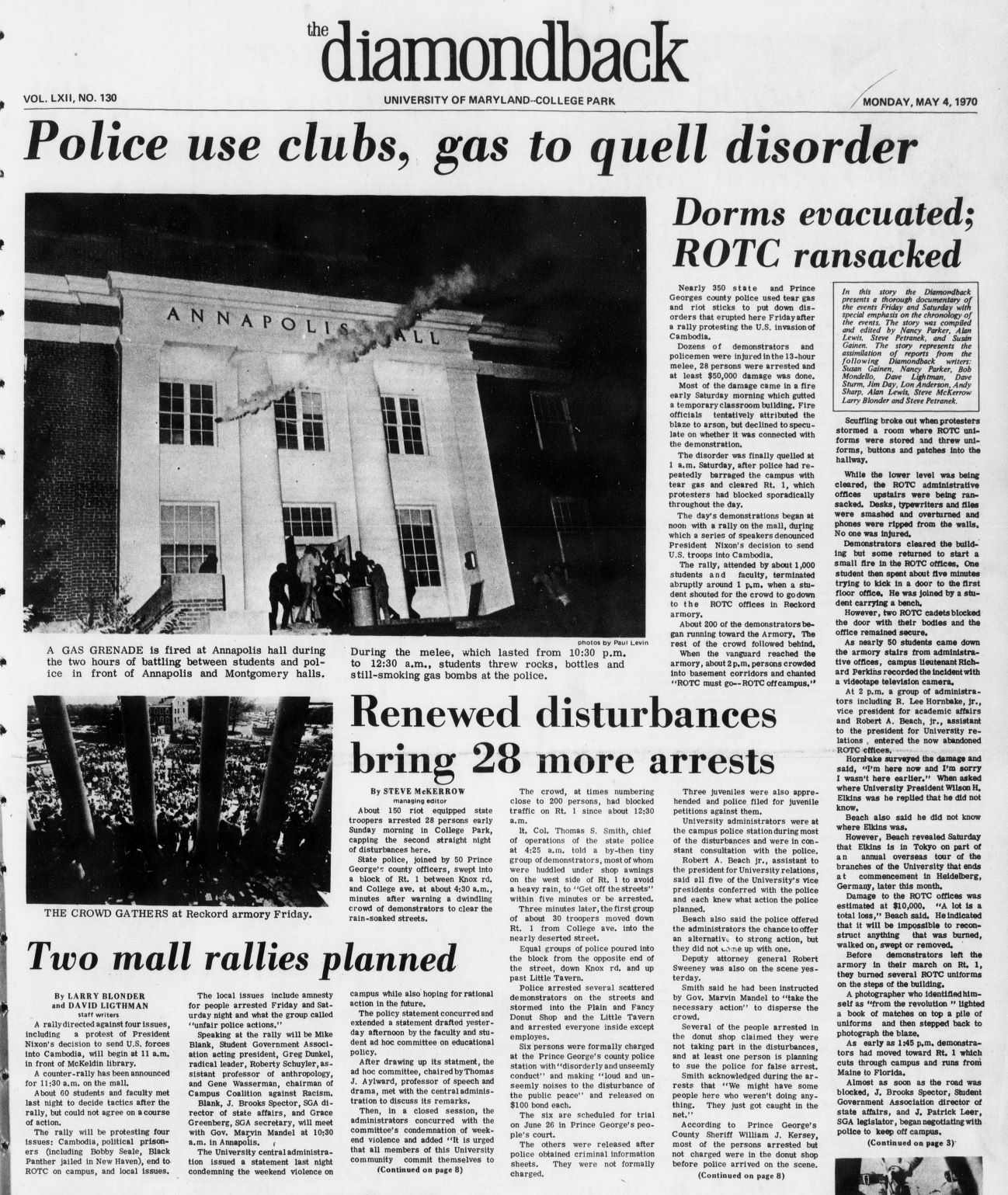 1970 - In reaction to the US bombings in Cambodia, University of Maryland students launched large scale protests on campus. Students sporadically blocked Route 1 and damage was inflicted on campus as a result of the protests. In the days after, articles discussed the continued protests by students, who also protest the presence of ROTC on UMD's campus.