Introduction to Racial Justice at UMD

The bulk of student activism related to racial justice on UMD's campus began in the late 1960s. As the African American student community on campus grew, the Black Student Union (BSU) was formed in 1968, which provided a way for Black students to organize and advocate for racial justice at the university. That same year, the BSU led a protest on the steps of the Home Economics building in response to racial discrimination in a nutrition study as well as racial violence that had occurred on campus earlier in the year. In the years since, students have continued to organize in defense of racial justice, garnering media coverage in student newspapers and beyond as they fought on behalf of many causes, including: a lack of diversity in the student body, faculty, administration, and educational course catalog; the divestment of UMD funds from companies doing business in South Africa during Apartheid; the ruling that the Banneker scholarship in support of Black college students was unconstitutional; the renaming of Byrd Stadium on campus due to Byrd's storied history as a segregationist; the support of undocumented students amid political controversy over the DREAM Act; an ongoing history of hate crimes on campus; and police brutality across the nation as well as on campus and in P.G. County, most recently with the mobilization of Black Terps Matter, a campus initiative working in the vein of the larger Black Lives Matter movement. In 2016, a coalition named ProtectUMD petitioned the University in support of marginalized, Native American and Indigenous, Black, Latinx, LGBTQ+, Muslim, Pro-Palestine, and Undocumented students. The group utilized hashtags such as #ProtectUMD and #ADifferentUMD to organize, communicate, and share stories of underrepresented experiences on campus. 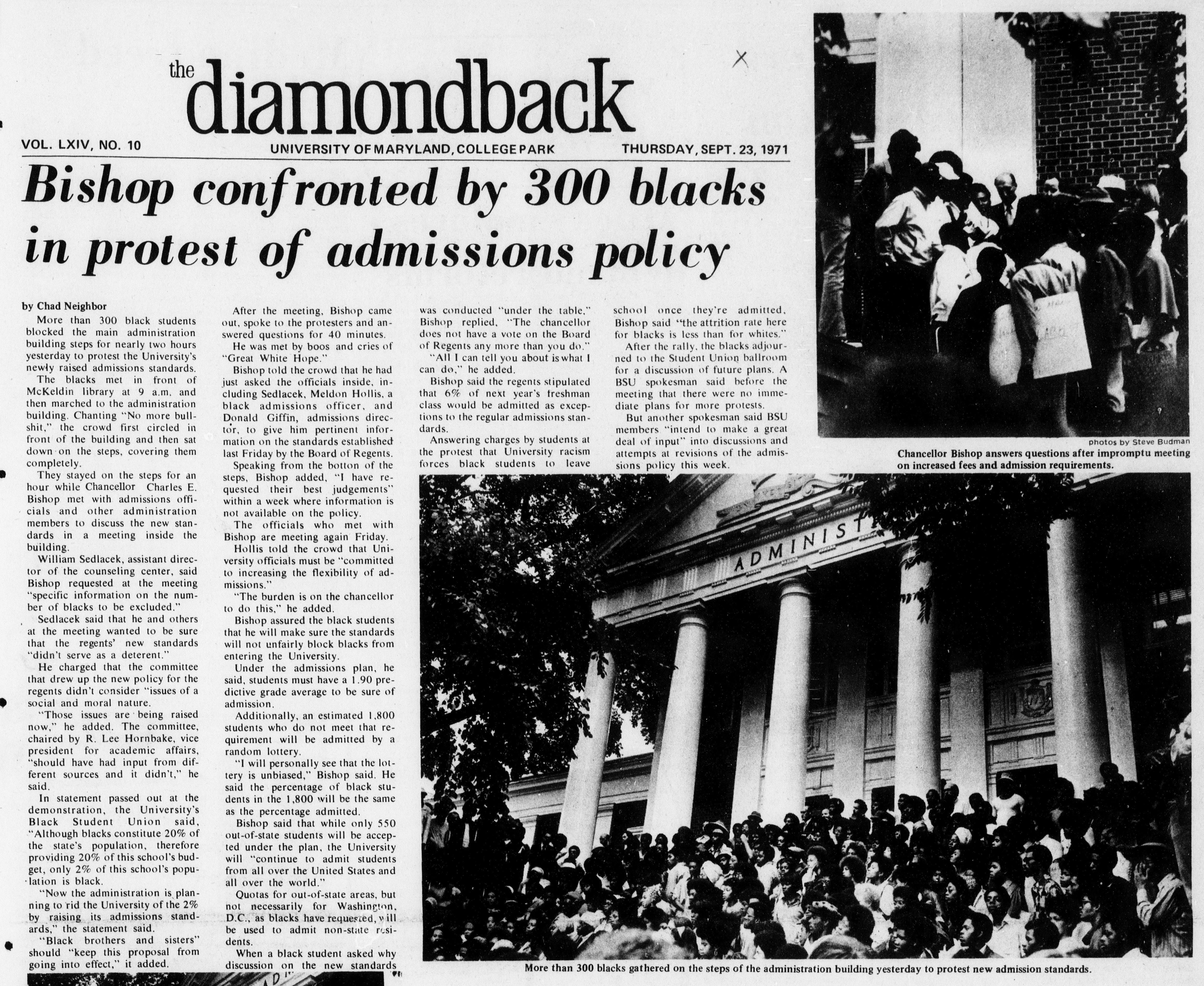 Bishop Confronted by 300 Blacks in Protest of Admissions Policy

September 1971 - 300+ Black students marched from McKeldin Library to the main administration building in protest of the increased admissions standards proposed by the University. Students were concerned that the new policies would disproportionately impact Black students who were already severely underrepresented and had a lower attrition rate than white students. 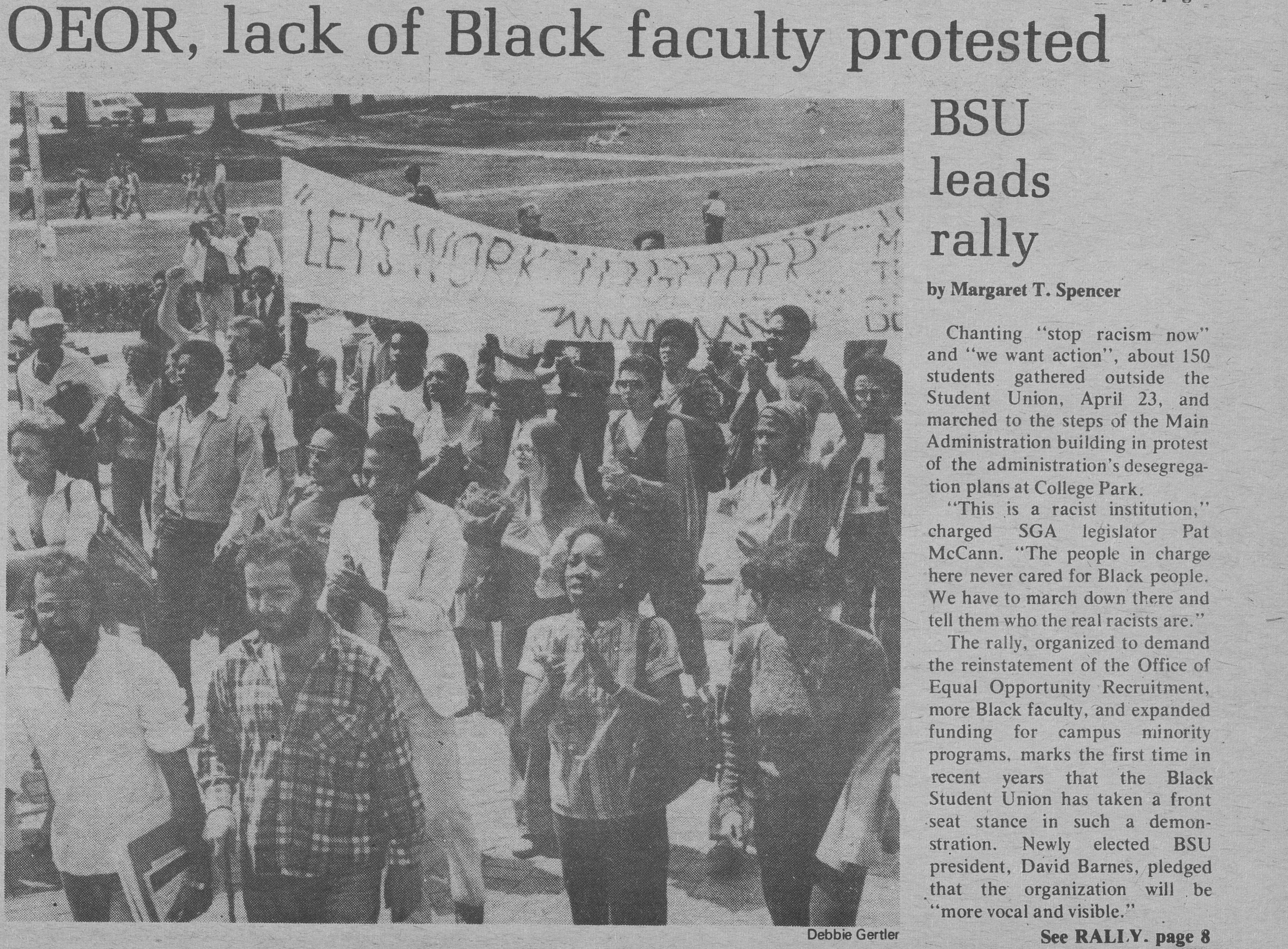 May 1980 - The BSU led a student rally of roughly 150 students outside the student union to demand the reinstatement of the Office of Equal Opportunity Recruitment, more Black faculty, and expanded funding for campus programs benefitting minority students. 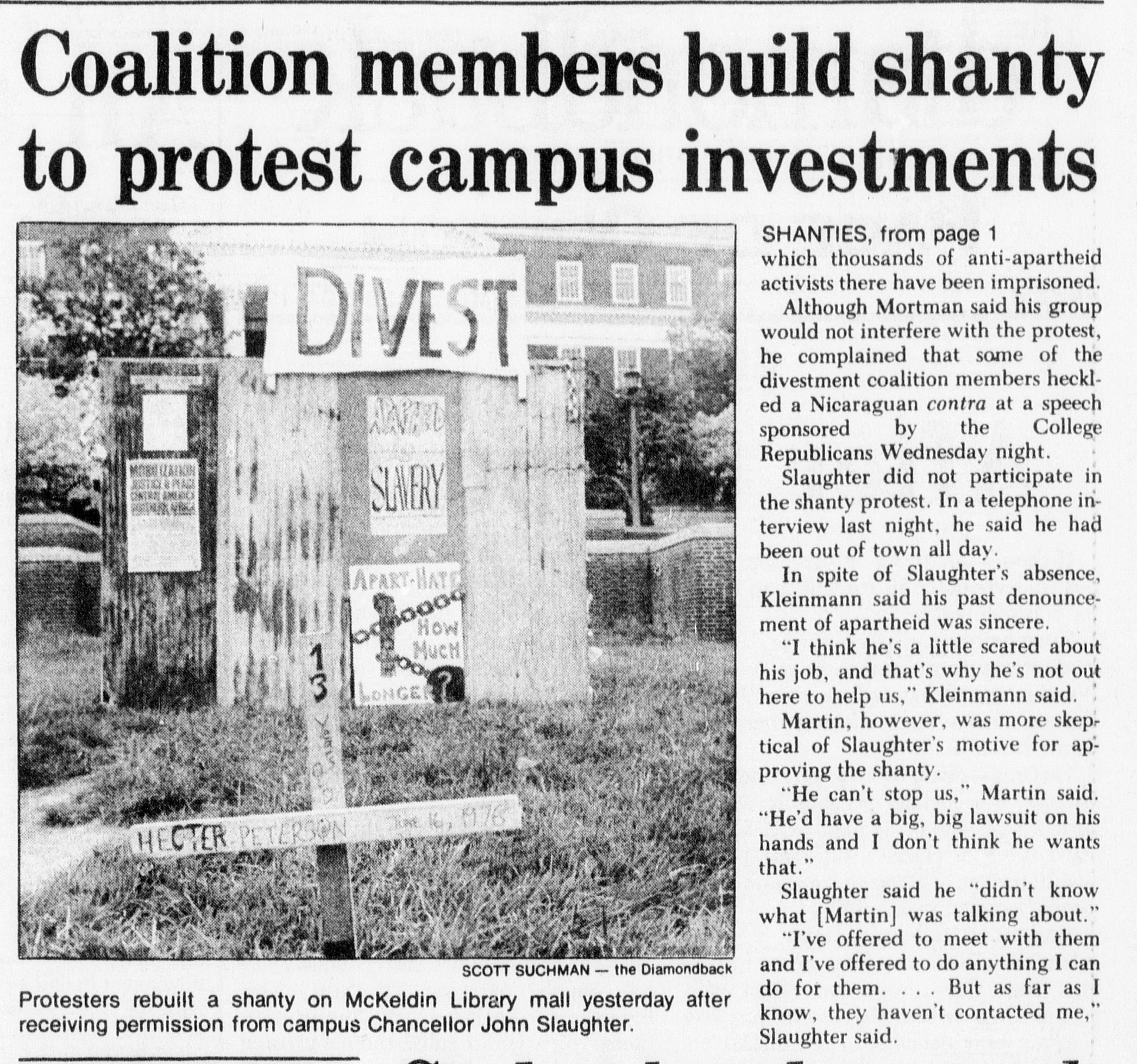 April 1987 - Members of the student organization Campus Divestment Coalition held a rally and built a shanty on McKeldin Mall to protest Apartheid in South Africa and demand the University of Maryland's divestment from companies doing business in South Africa. The article also discusses the events of the divestment protests throughout the previous year. 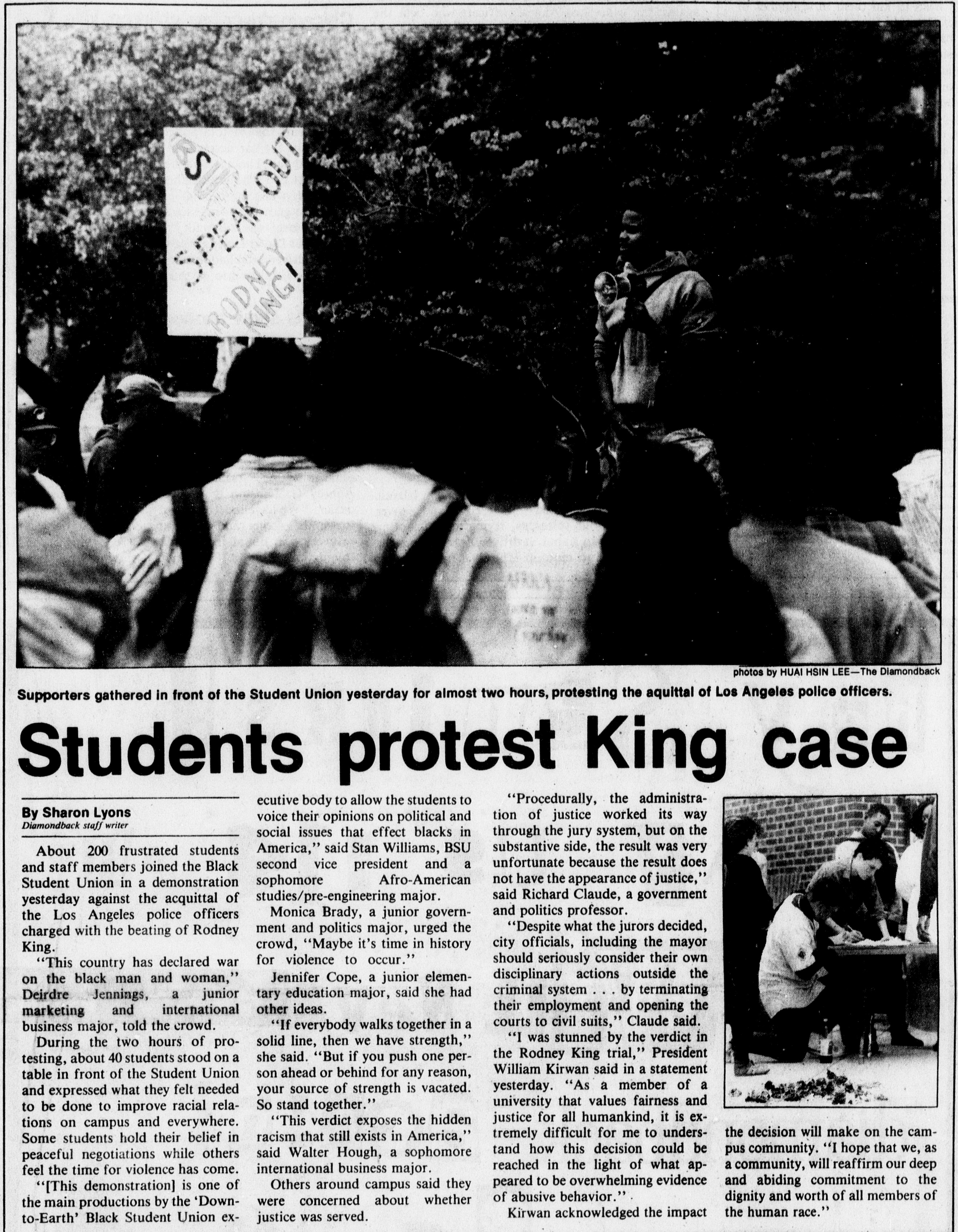 May 1992 - The BSU was joined by 200+ UMD students and staff as they demonstrated against the acquittal of the police officers charged with beating and killing Rodney King in Los Angeles. 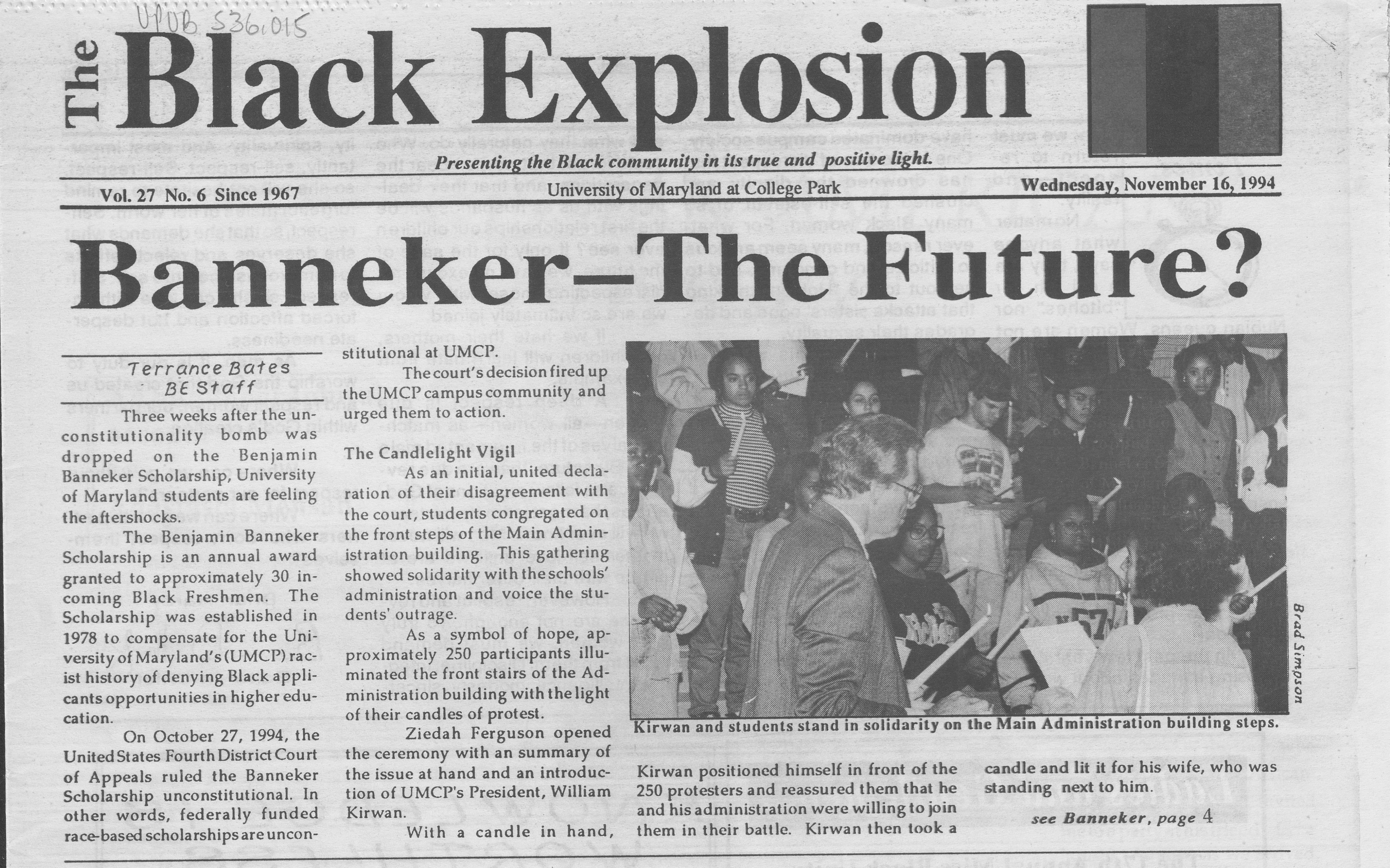 November 1994 - After the Benjamin Banneker Scholarship given in support of Black college students at UMCP was deemed unconstitutional, students held a candelight vigil in protest of the decision and in support of the scholarship. 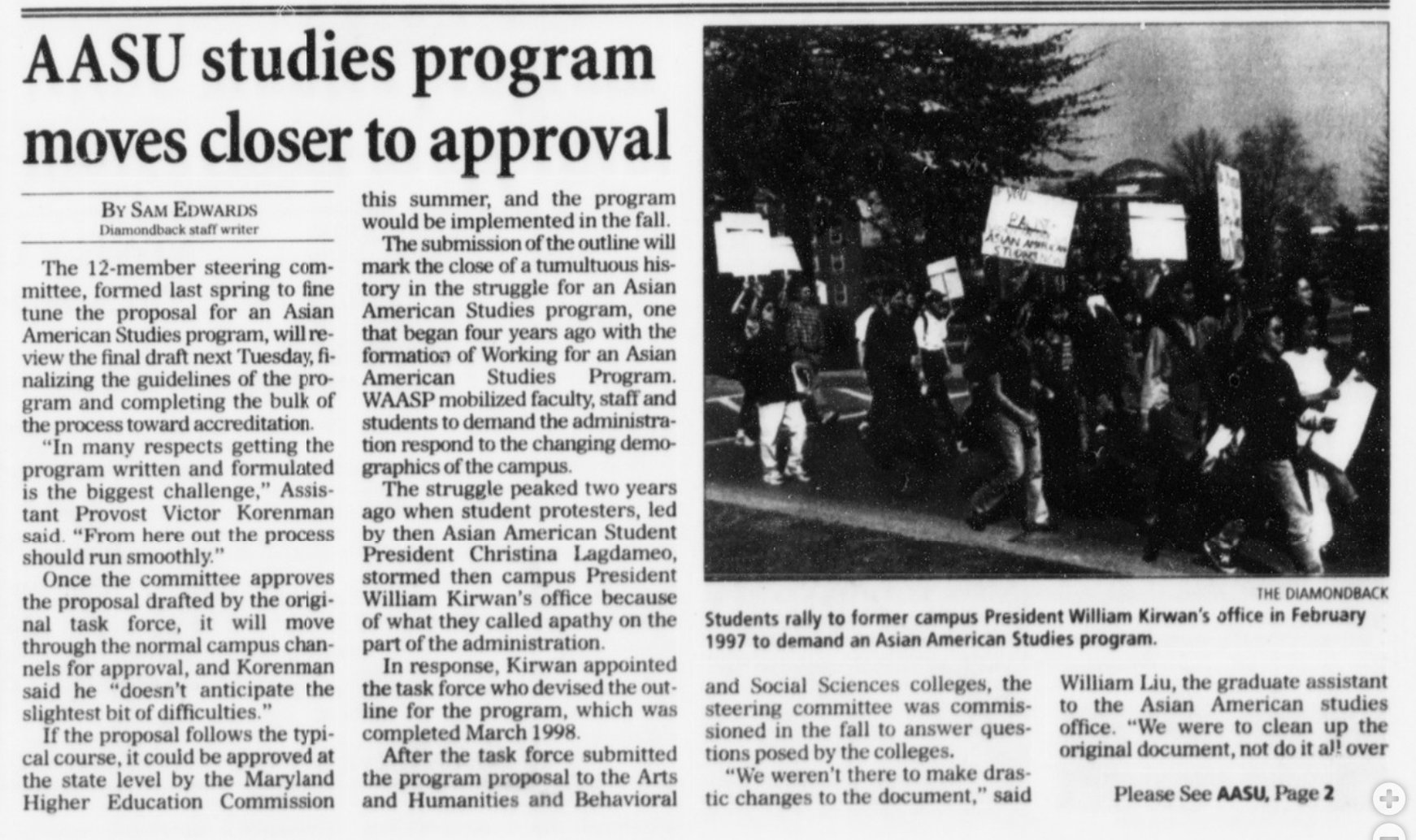 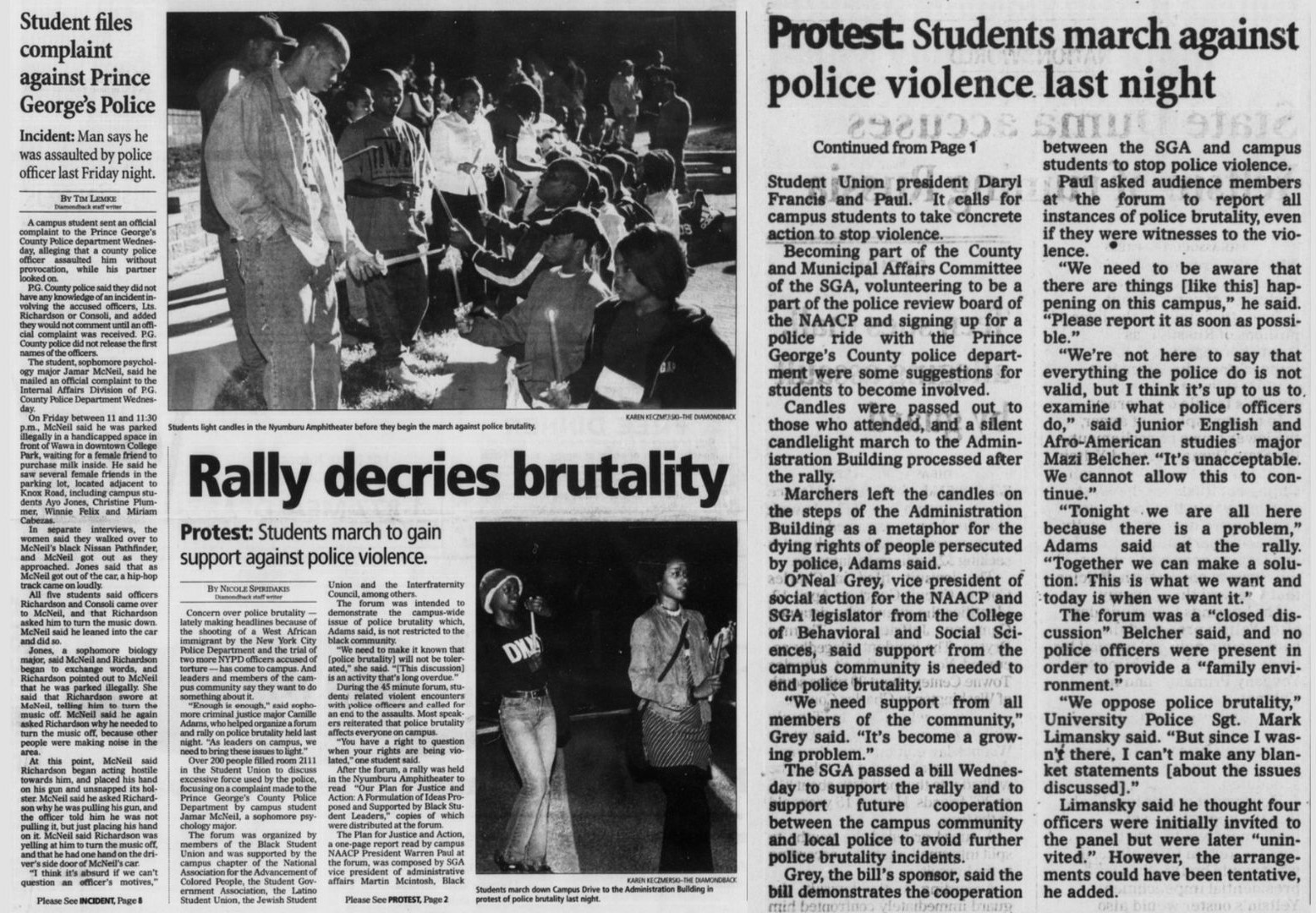 May 1999 - 200+ students gathered in the Student Union building for a forum on police brutality, organized by the BSU, NAACP student chapter, Student Government Association, Latino Student Union, Jewish Student Union, and Interfraternity Council. After the forum, a rally was held in the Nyumburu Amphitheater to read “Our Plan for Justice and Action: A Formulation of Ideas Pro­posed and Supported by Black Stu­dent Leaders." Students then took a silent candlelight march to the Admin­istration Building, leaving candles on the steps as a metaphor for the dying rights of people persecuted by police. 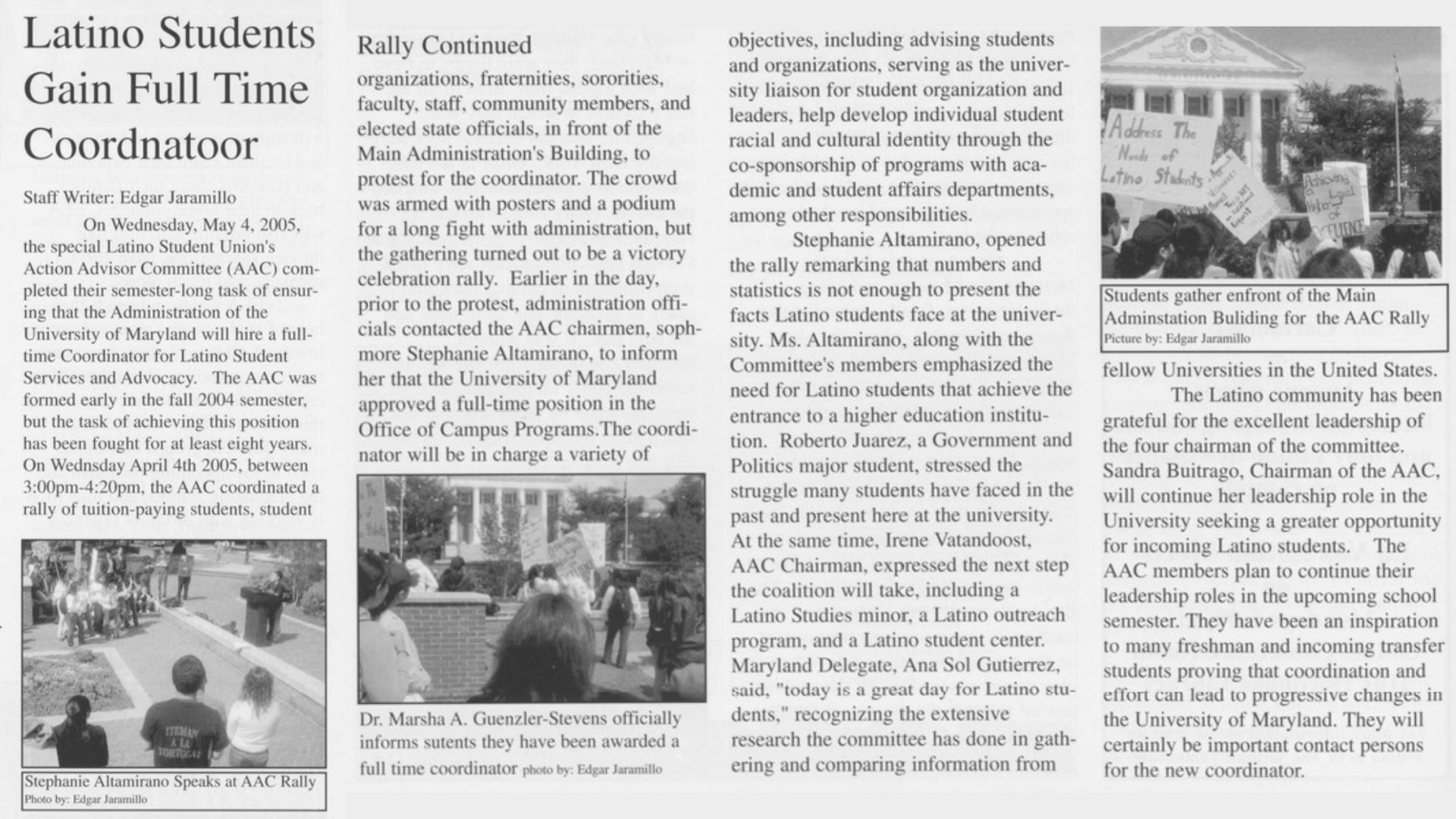 September 2005 - A full­-time Coordinator for Latino Student Services and Advocacy was finally hired after a semester of fighting on behalf of the Latino Student Union's Action Advisor Committee (AAC). The AAC was formed in Fall 2004, but the push for the position began 8+ years prior. The decision was announced during an AAC-led protest comprised of students, student organizations, fraternities, sororities, faculty, staff, community members, and elected state officials in front of the Main Administration's Building. 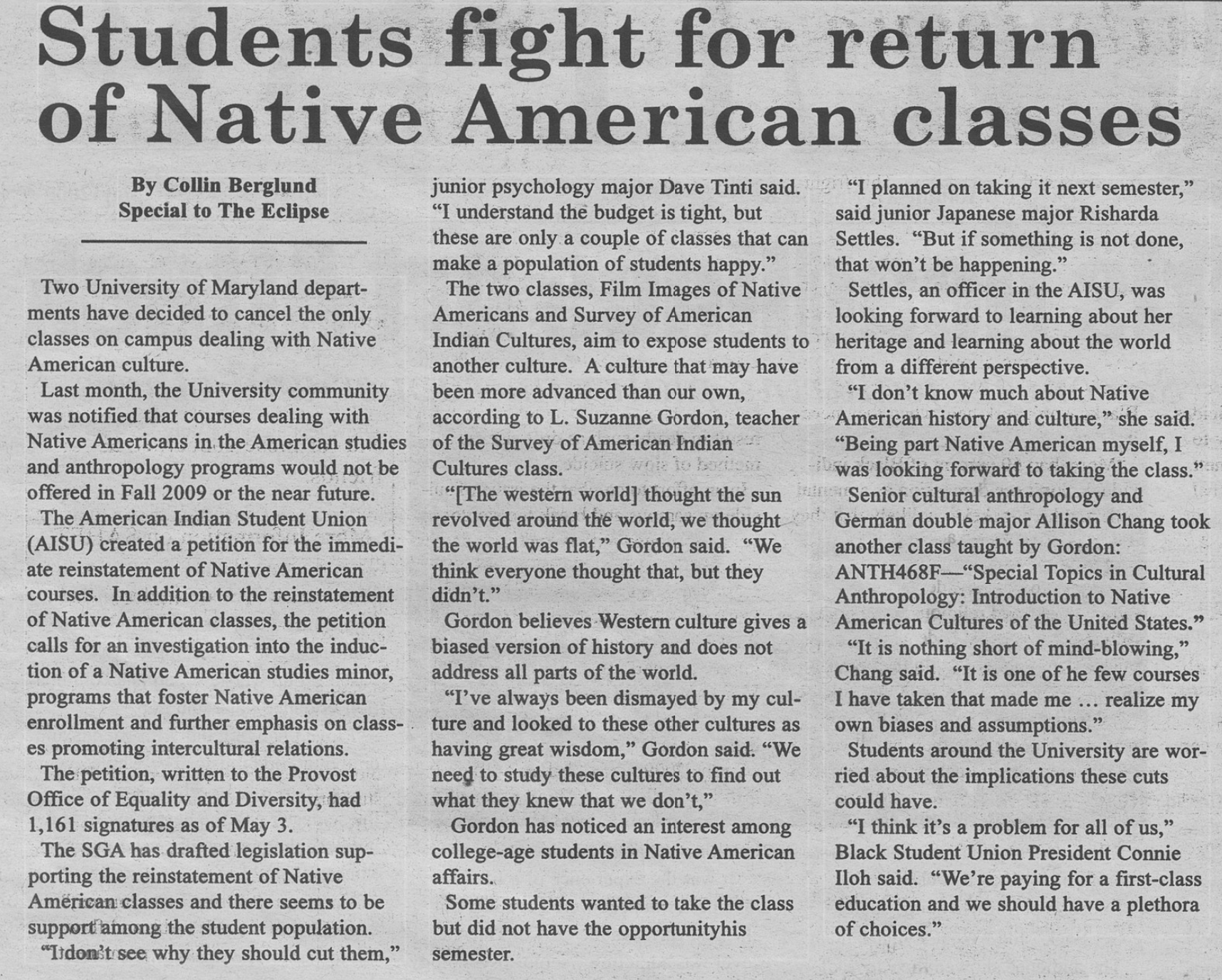 May 2009 - After the university cancelled the only two classes offering content related to Native American history and culture, the American Indian Student Union (AISU) created a petition for the immedi­ate reinstatement of the courses, an investigation into the formation of a Native American Studies minor, the creation of programs that foster greater enrollment of Native American and Indigenous students, and a renewed emphasis on class­es promoting intercultural relations. 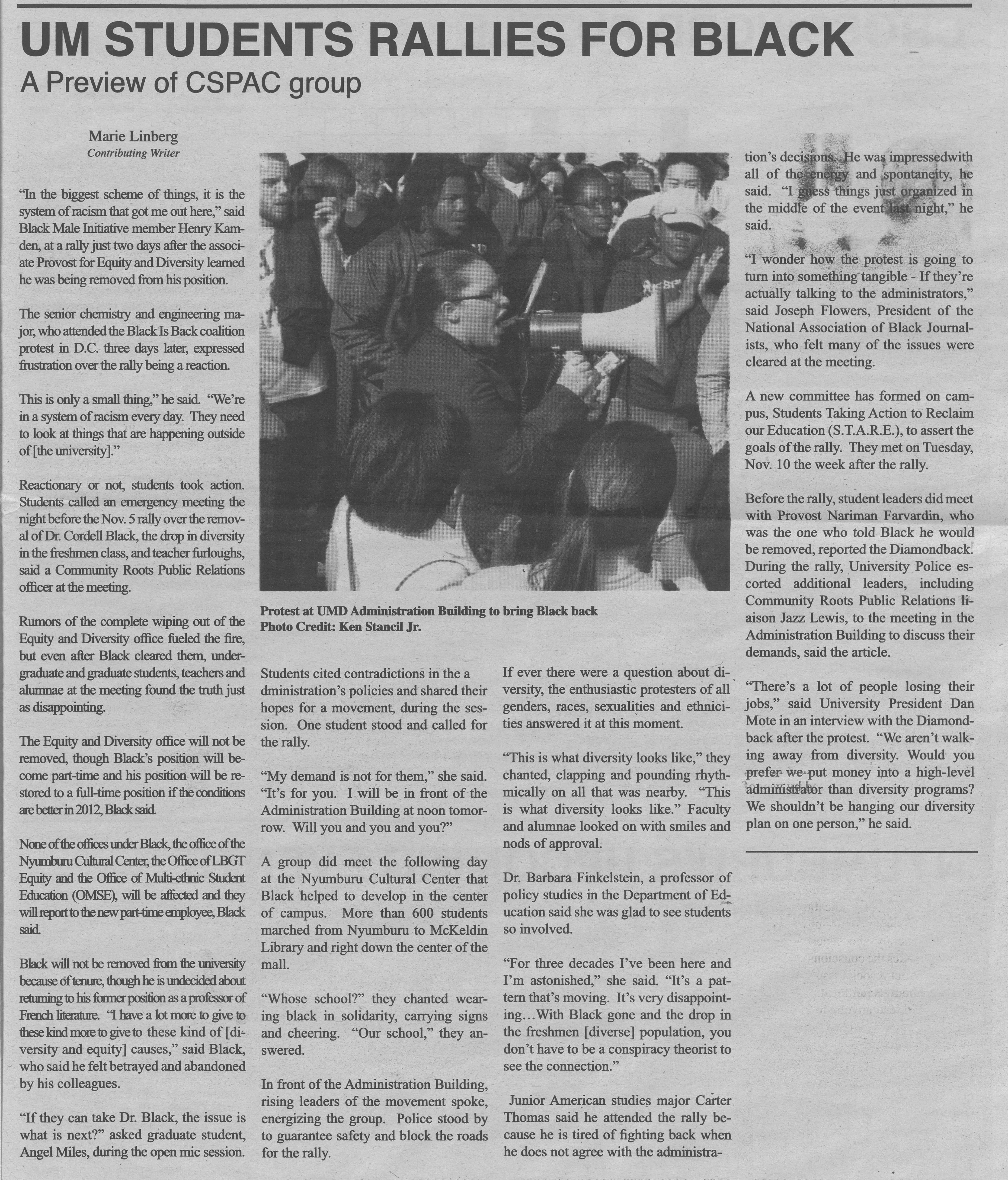 November 2009 - 600+ Students, alumni, and faculty marched from the Nyumburu Cultural Center to McKeldin Library in protest of the remov­al of Associ­ate Provost for Equity and Diversity, Dr. Cordell Black, as well as proposed changes to the Equity and Diversity office, the drop in diversity in the freshmen class, and teacher furloughs. 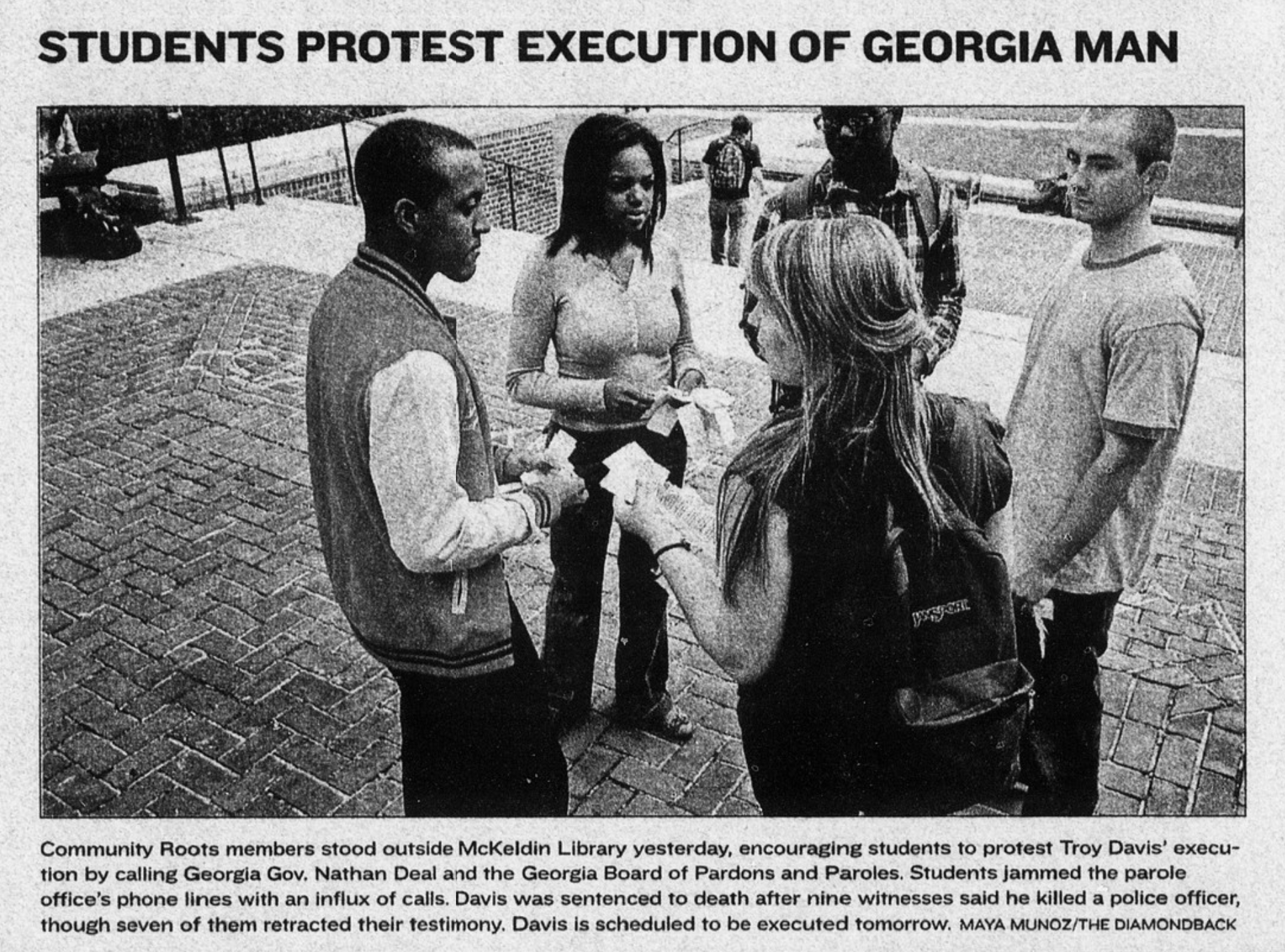 September 2011 - Members of campus student organization Community Roots stood outside McKeldin Library encouraging students to protest Troy Davis' execu­tion by calling Georgia's governor and the Georgia Board of Pardons and Paroles. Davis was sentenced to death for allegedly killing a police officer although the case was based almost entirely on nine witnesses testimonies, seven of whom retracted their statements, claiming they were coerced in testifying by the police.

April 2012 - The university's Women's Studies, American Studies, and African-American Studies departments sponsored a forum and vigil to remember Trayvon Martin, the 17-year-old Florida high school student who was shot and killed in February 2012 after a neighborhood watchman found the teenager in a hooded sweatshirt to be "suspicious." 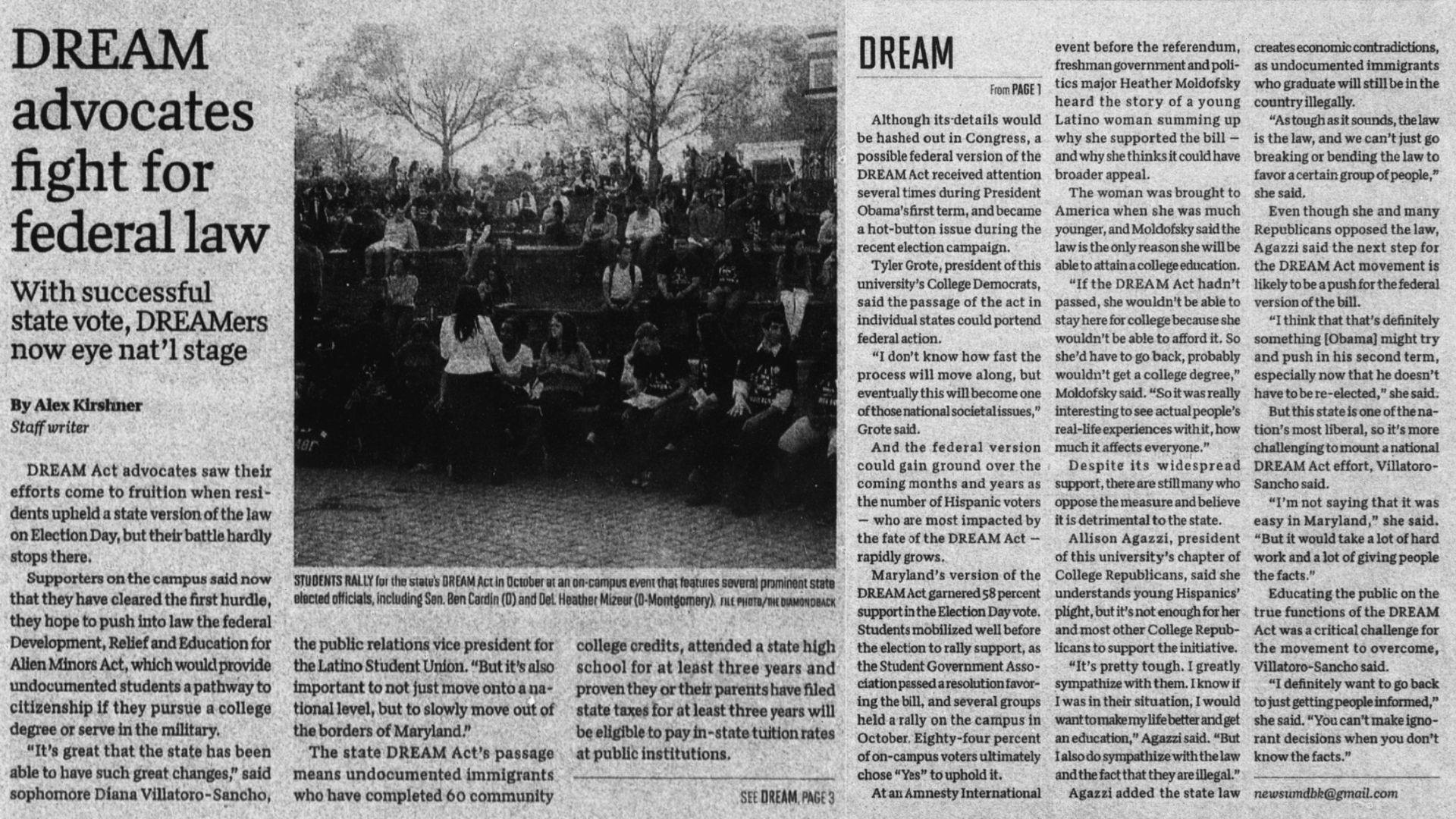 October 2012 - A crowd of more than 250 stu­dents, supporters, and government officials joined together at the Nyumburu Amphitheater to show support for the DREAM Act, which would permanently protect and provide a pathway to legal status for undocumented people who came to the U.S. as children. Supporters included members of the Student Gov­ernment Association, which passed a resolution supporting the DREAM Act prior to the rally. 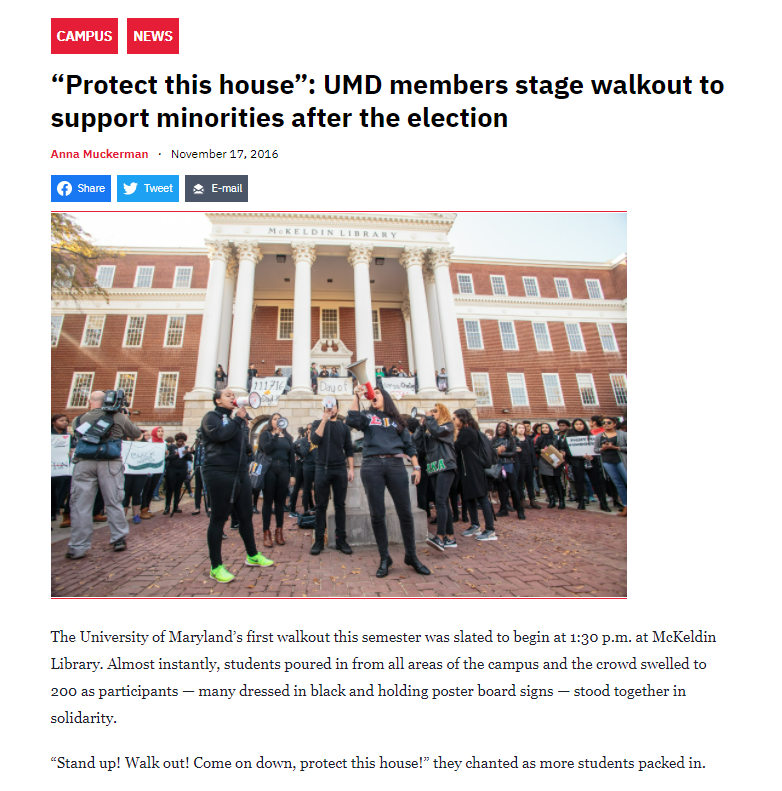 November 2016 - University of Maryland students associated with the Protect UMD coalition organized a walk-out in support of UMD students from minoritized backgrounds. On the same day, the Protect UMD coalition published a list of demands addressing how to make the University of Maryland safer and more inclusive for all students.