How to use materials in the Gordon W. Prange Collection

This guide shows you how to search and access the materials housed in the Gordon W. Prange Collection

RELATED COLLECTIONS AT THE UNIVERSITY OF MARYLAND LIBRARIES

Listed below are personal collections of Americans who spent time in Allied Occupied Japan, including Gordon Prange himself.  These collections are housed in Special Collections and University Archives at the University of Maryland. 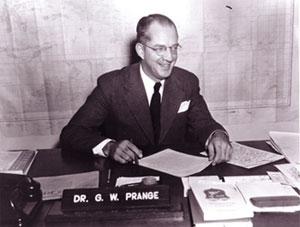 Dr. Gordon W. Prange (July 16, 1910 - May 15, 1980) was an historian and history professor at the University of Maryland from 1937 until his death in 1980. While teaching at the University of Maryland, Prange published many books and articles on a variety of historical topics, but he is probably best known for his research on the December 7, 1941 attack on Pearl Harbor by Japanese forces during World War II. Prange conducted interviews and collected accounts from diaries, articles, and correspondence with many of the key participants in the battle, both Japanese and American, as well as completed extensive research on the causes, planning, build-up to, and execution and consequences of the attack. Prange's Pearl Harbor research was published posthumously in three volumes: At Dawn We Slept: The Untold Story of Pearl Harbor (1981), Pearl Harbor: The Verdict of History (1986), and December 7, 1941: The Day the Japanese Attacked Pearl Harbor (1988). The Gordon W. Prange Papers cover the period from 1866 to 2002, with the bulk of the materials dating from 1936 to 1980. The collection consists of both personal and professional papers and includes unpublished manuscripts, correspondence, interview notes and transcripts, research notes, articles, maps, and photographs related to Prange’s research on the attack on Pearl Harbor, the Battle of Midway, the Russian spy Richard Sorge, and the speeches of Adolf Hitler. There are also materials related to Prange's tenure as a history professor at the University of Maryland and Prange's service as an historian for the US Army under General Douglas MacArthur during the Allied occupation of Japan.

Jerome Forrest was an economist, trade negotiator and an Army intelligence officer in the Far East during World War II. He attended the University of Maryland as a graduate student for a brief period in spring 1951. The Jerome Forrest papers, which cover the period from 1945 to 1995, include correspondence between Forrest and former University of Maryland history professor Dr. Gordon W. Prange as well as accounts of interrogations of former members of the Japanese army concerning the Battle of Wake Island in which he participated. In addition there are articles by Forrest and others concerning General Douglas McArthur and post-World War II Japan as well as Japanese publications and U.S. Army reports from this era. There is also a photograph of Dr. Prange and Jerome Forrest, a U.S. War Department personnel file, and editorial work papers from the period of time where Forrest worked as an economist and trade negotiator.

Theodore Hart McNelly was an Associate Profesor of Government and Politics at the University of Maryland, College Park, from 1962 to 1991. The McNelly papers include documents from McNelly's college years, his time in post-war Japan on General MacArthur's staff, and teaching at University of Maryland through his retirement years. Much of the material consists of research materials, articles, lectures, and drafts and chapters of his books, including : Origins of Japan's Democratic Constitution, Politics and Government in Japan, and Witness to the Twentieth Century.