This guide directs you to Pompeii related resources available in Special Collections at the University of Maryland Libraries.

Some examples of subject headings for this topic are:

Enter a search term below to find an item in the catalog: 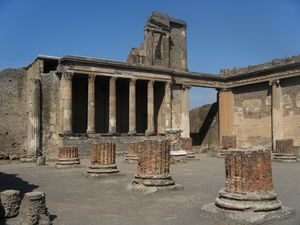 Before being destroyed in 79 A.D., the towns of Pompeii and Herculaneum were thriving.  The location on the Bay of Naples and temperate climate enabled the population to participate in the trade and agriculture of the region.  This area was also viewed as a resort location by much of Rome's wealthy, many of whom built vacation villas there. Little did the people in Pompeii and Herculaneum know how much everything would change on August 24th, 79 A.D.

Since Pompeii was directly downwind of Mount Vesuvius, the heaviest part of the ash cloud fell there. Poisonous gas caused most peoples' deaths in Pompeii, while in Herculaneum most of the deaths were a result of pyroclastic surges of hot gas and rock.  Pompeii was completely covered in ash and volcanic deposits, which resulted in a great amount of preservation of artifacts and  buildings, and allowed the now famous casts of people and animals to be taken.

The books in this guide explore what life was like in Pompeii and Herculaneum before the eruption, the affect that eruption had, and the information that has been uncovered by archeologists over the past few hundred years.

Books on Pompeii in the Maryland Room

This page contains books that the Maryland Room currently has on the subject of Pompeii.  To narrow your search down, you can also use the drop down menu at the top of the page, which divides the subject further into "The City of Pompeii," "Art Related," and "Gardens."

Pompeiana: the topography, edifices and ornaments of Pompeii, the result of excavations since 1819 - Gell, William, Sir 1777-1836
Call Number: DG70.P7G4 1832
There are 88 prints in this book, with large descriptions accompanying them. The illustrated prints include scenes of Pompeii, art, architecture, and plans of buildings. Some prints in color.