Roger Nixon (1921–2009) was an American composer, musician, and professor of music. He was Professor Emeritus of music at San Francisco State University and a member of the American Bandmasters Association.

A native of California, Nixon attended Modesto Junior College, where studied clarinet with Frank Mancini, formerly of John Philip Sousa's band. He received a bachelor of arts, master of arts, and doctorate of philosophy in composition from the University of California at Berkeley, where he studied primarily with Roger Sessions as well as Arthur Bliss, Ernest Bloch, Charles Cushing, Frederick Jacobi, and Arnold Schoenberg.

Nixon has been honored by the Texas Bandmasters Association as a Heritage American Composer. He has also received several awards for composition, including a Phelan Award, the Neil A. Kjos Memorial Award, five grants from the National Endowment for the Arts, and the 1973 ABA Ostwald Award for his composition Festival Fanfare-March. 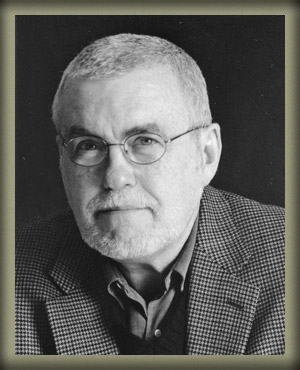 James S. Sclater (b. 1943) is a retired professor of music from Mississippi College, where he taught advanced music theory, counterpoint, orchestration, ear training, choral arranging, and band arranging for forty years. He attended the University of Texas at Austin where he received a doctorate of musical arts in composition. He continued his post-graduate studies in theory and composition at the University of Southern Mississippi.

Sclater has been awarded the prize for music composition from the Mississippi Institute of Arts and Letters on six different occasions and has won numerous other awards. He has previously served as a clarinetist in the Mississippi Symphony Orchestra, music librarian in the Austin Public Library, and has been a member of professional associations such as the International Clarinet Association, the Jackson Wind Symphony, and the Mississippi Music Teachers Association. Sclater won the 1974 Ostwald Award for his composition Visions.

A native of Washington state, Robert Panerio Sr. (b. 1929) is a retired professor of music from Central Washington University, where he received the Distinguished Professor Award for Creativity in 1982. Previously, Panerio was supervisor of instrumental music at Moses Lake, Washington, and Dean of Arts and Humanities at Big Bend College, where he worked until 1963. During his time at Central Washington University, Panerio was also a visiting professor at Eastern Oregon State College.

Panerio received B.A. and M.A. degrees from Central Washington University and later pursued doctoral studies at the Eastman School of Music. For many years, Panerio was a professional trumpeter playing symphonic, show, and jazz music.

As a composer, Panerio has written many works for band and orchestra, including Jubiloso for concert band, which won the 1975 Ostwald Award.

Jankowski has written prize-winning music for orchestra, voice, and concert band and more than 30 principal works. Her music has been performed in Carnegie Hall, Lincoln Center for the Performing Arts, the John F. Kennedy Center for the Performing Arts, the Corcoran Gallery of Art, the Museum of Modern Art, Holy Trinity Chapel at New York University, Yale University, and the Fifth International Festival of Experimental Music in Bourges, France. She has also received a lifetime achievement award from the Piano Teachers Society of America.

Jankowski won the 1976 Ostwald Award for Todesband, a work for large wind ensemble. The piece, based on a Bach chorale, gradually works from dissonance and ascends to joyful harmonizations.

A scan of the score for Todesband is available through UMD Digital Collections: http://hdl.handle.net/1903.1/32985 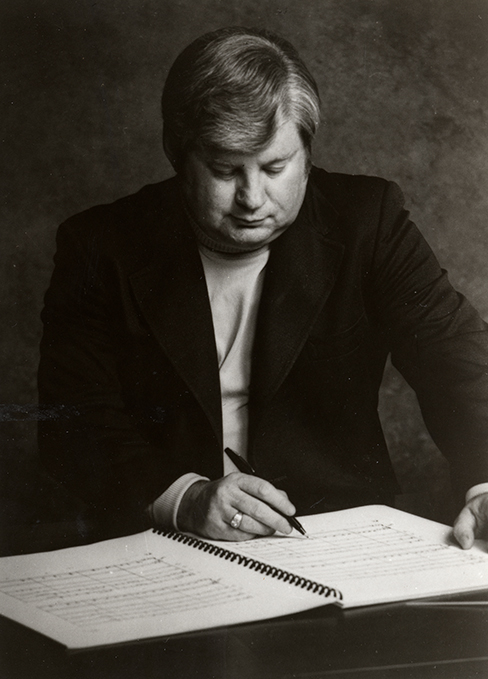 William H. Hill (1930–2000) graduated from the University of Northern Colorado with a bachelor of arts degree in 1952 and a master of arts degree in 1955. After graduating, he worked as a woodwind instructor and director of bands at East Texas State University before beginning a Ph.D. program at UCLA, where he taught saxophone and arranging techniques. From 1972 to 1982, Hill was band director and chairman of the instrumental music program at California State University. While teaching, he also conducted and led band clinics throughout the world.

Hill was first runner-up in the 1976 Ostwald Competition for his piece Sonitus Revelationis. The following year, Hill won the Ostwald Award for Danses Sacred and Profane, which was performed by the U.S. Marine Band at the 1977 ABA Convention. 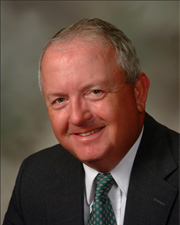 His compositions have been performed widely in America, Europe, Japan, Taiwan, and Australia and recorded by the Tokyo Kosei Wind Orchestra. Barnes is also a tubist and has performed with numerous professional organizations in the United States.

He is a two-time winner of the ABA Ostwald Award for contemporary wind band music. He won his first award in 1978 for his Symphony, op. 35, written for his master of music degree.

The Ostwald Prize was given to him in 1981 for Visions Macabres, a symphonic impression of the Hieronymus Bosch painting The Garden of Earthly Delights. Barnes conducted the University of Kansas Symphonic Band in the premiere of the piece. 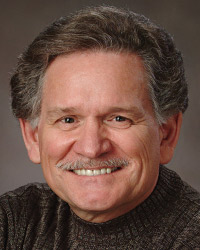 James Curnow (b. 1943 in Port Huron, Michigan) currently lives in Nicholasville, Kentucky, where he is Composer-in-Residence (Emeritus) at Asbury University. He is also president, composer, and educational consultant for Curnow Music Press, Inc., and editor of all music publications for the Salvation Army in Atlanta.

Curnow received his bachelor’s from Wayne State University and his master’s from Michigan State University, where he was a euphonium student of Leonard Falcone and a conducting student of Dr. Harry Begian. His studies in composition and arranging were with F. Maxwell Wood, James Gibb, Jere Hutchinson, and Irwin Fischer.

Curnow has taught in all areas of instrumental music, both in the public schools (five years) and at the college and university level (26 years). He has won several awards for band compositions, including the ASBDA/Volkwein Composition Award in 1977 (Symphonic Triptych) and 1979 (Collage for Band), the ABA Ostwald Award in 1980 (Mutanza) and 1984 (Symphonic Variants for Euphonium and Band), the 1985 Sixth International Competition of Original Compositions for Band (Australian Variants Suite), the 1994 Coup de Vents Composition Competition of Le Havre, France (Lochinvar), and many annual ASCAP awards.

Curnow won the ABA Ostwald Award in 1980 for Mutanza, a set of symphonic variations for band. He won the award again in 1984 for his Symphonic Variants for Euphonium and Band.