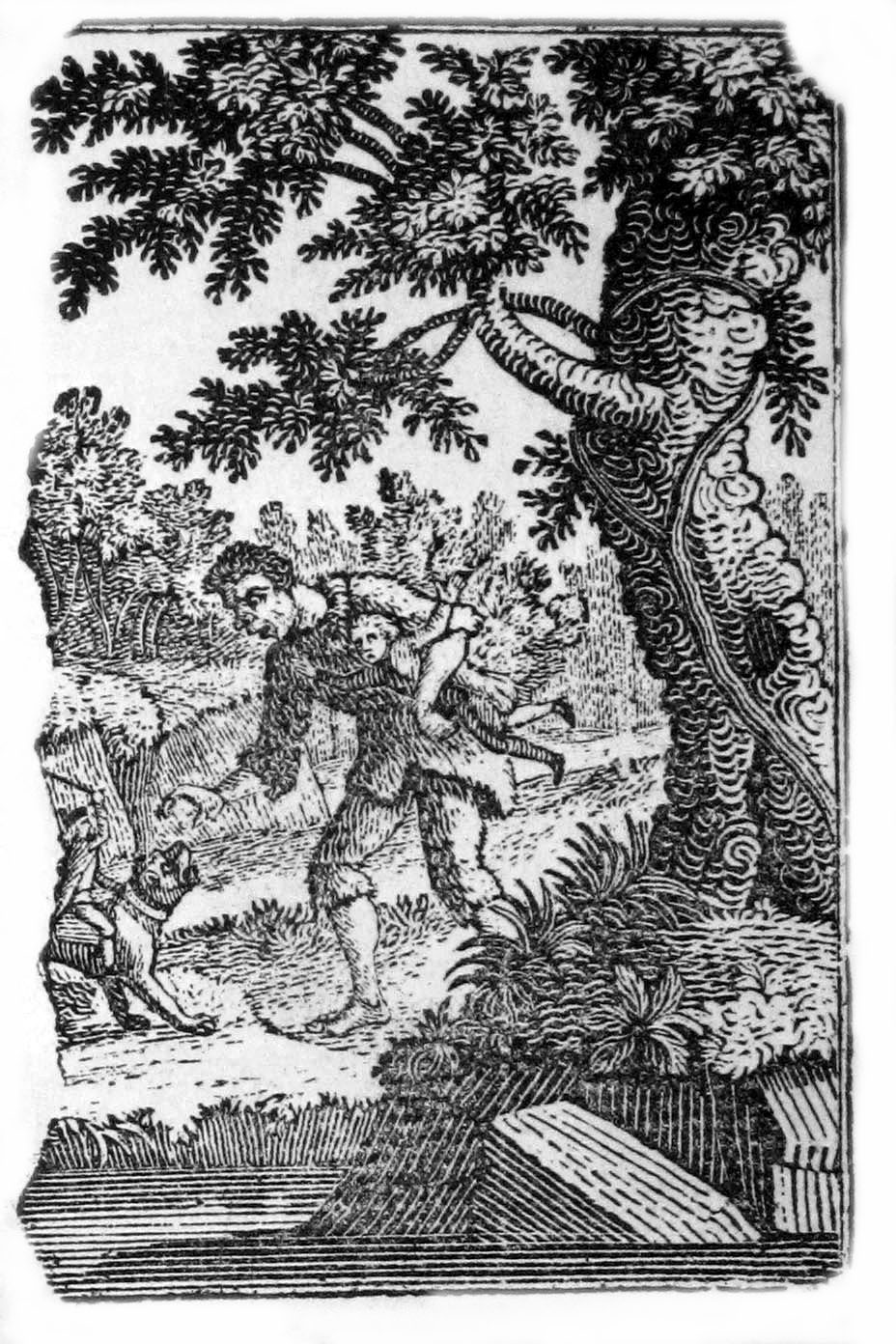 From Wood Engravings from A Pretty Book of Pictures for Little Masters and Misses, 1779. 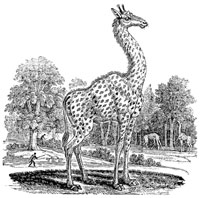 The Giraffe or CamelLeopard from The General History of Quadrupeds, 1790 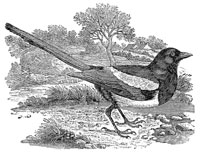 The Magpie from A History of British Birds - Volume I (Land Birds), 1797 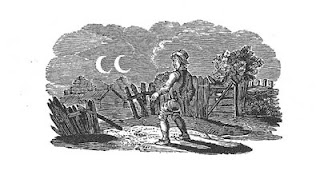 The Fox and the Grapes from The Fables of Aesop, 1818

A Biography of Thomas Bewick

On August 12, 1753, Thomas Bewick was born at Cherryburn House in the Village of Mickley, in the parish of Ovingham, Northumberland, England. His father rented a small colliery at Mickley Bank, and sent his son to school in the nearby village. Although Bewick was a poor student, he showed an affinity and talent for drawing at a very early age. When he was 14 years old, he was apprenticed to Ralph Beilby, an engraver in Newcastle. Among other tasks in Beilby's workshop, Bewick was responsible for etching sword blades, blocking out the wood about the lines on diagrams for the popular almanac known as the "Ladies' Diary" and engraving a series of diagrams on wood for Dr. Charles Hutton's "Treatise on Mensuration", followed by creating numerous illustrations for commissioned childrens books, the most notable of which were the cuts he did for an edition of "Gays Fables".

In 1774, Bewick's internship came to an end and he ventured to London for a brief period but rather quickly returned to Newcastle and established a business partnership with Beilby.

A General History of Quadrupeds, one of Bewick's most famous works, was begun in 1785, and first published in 1790. In general, those domestic animals with which Bewick was most familiar were depicted accurately, but in the cases of exotic creatures which he had never observed in the wild, inaccuracies were more prevalent. For instance his renderings of the hedgehog and the badgar are perfect, but his giraffe is awkward and in the text he questions its very existence.

His next project, which was to be the crowning achievement of his career, was the History of British Birds. In this text, Bewick was much less likely to have difficulty obtaining an accurate idea of any of the subjects; frequently working directly from life or from recently shot specimens. In his Memoir, he described his determination "to stick to nature as closely as [he] could" (154). The first volume, "Land Birds", was published in 1797, with the second volume, "Water Birds", following in 1804. Large additions of both illustrations and descriptions were made in succeeding issues. Bewick's illustrations in Birds were nearly perfect, as he was called upon to copy faithfully as opposed to create or reconstruct; and he was passionate about, and incredibly knowledgeable of, the subject matter.

One of the most popular features of both Quadrupeds and Birdsare the well-known and often reproduced tail-pieces; small illustrations that end book segments or chapters and fill the white space on a page. These images often displayed Bewick's sense of humor or unique personal observations. The greatest number of tail-pieces can be seen in the Birds edition of 1847 and the Quadrupeds of 1804, and must be studied to be truly appreciated.

Bewick's most notable publication during the latter portion of his life was The Fables of Aesop, in 1818. Bewick recalls in his Memoir: "I could not help regretting that I had not published a book similar to 'Croxall's Aesop's Fables', as I had always intended to do." (173) After recovering from an extended illness in 1812, Bewick began designing the engravings on the wood, while the carving was carried out by his apprentices under close supervision and refined where necessary by himself. Many of the tail-pieces are well done and humorous but they are generally described by art historians as being "more laboured and less happy."

Bewick's artwork is a prime example of excellence in the medium and he is generally considered to have restored wood engraving to popularity the restorer in England, as the practice had fallen largely out of favor prior to his internship. He was among the earliest to cut upon the end of the wood instead of along it, and he invented the technique known as "white line" wood engraving. In the simplest of terms, Bewick paid most attention to what he cut away from the block, as opposed to what he left. He created a white design upon a black block which was to produce a black design upon white paper. Unlike his predecessors, Bewick carved in harder woods (most notably box wood), against the grain, using fine tools normally favored by metal engravers. This method proved to be far superiour and has been the most common technique utilized since.

Bewick was entirely self-taught in the art of wood engraving and became one of the first British artists to earn his living almost exclusively from illustrating books. Bewick is also noteworthy for having used his fingerprint as a form of signature in conjunction with his written name to denote individuality in his publications. The significance of this happening nearly 200 years ago lead some to believe that Bewick is among the first to recognize the uniqueness of each individual human fingerprint.

Bewick had numerous apprentices and pupils, several of whom gained notoriety as engravers, including Luke Clennell, Charlton Nesbit, William Harvey, and his own son, Robert Elliott Bewick.

Bewick's autobiography, Memoirs of Thomas Bewick, by Himself, was published in 1862.