William Morris and the Kelmscott Press

A guide to resources on William Morris available in Special Collections at Hornbake Library. 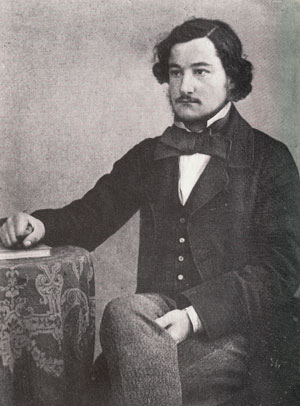 William Morris (1834-1896) was a British poet, designer, artist-craftsman, typographer, preservationist, early environmentalist, socialist, and business owner. The importance of Morris's diverse and prolific career lies in the sum of its parts the total impact of his personal philosophies and numerous artistic endeavors. His work, and that of fellow Pre-Raphaelite artists such as Dante Gabriel Rossetti and Sir Edward Burne-Jones, is intimately tied to the Gothic Revival in Britain, and later to the Arts and Crafts movement.

Throughout his life, William Morris strove to transform the industrialized world of nineteenth-century England into a new world in which socialism met Romantic libertarianism, art was an organic part of common life, work was a creative and joyous pursuit, humanity and nature peacefully co-existed, and the best of the past (particularly the medieval world) was integrated with the future.

Hoping to bring beauty to the industrialized world and to create a meaningful relationship between form and function, daily life and art, Morris revived traditional crafts including embroidery and weaving, stained glass, illumination and calligraphy, hand-printing and book design. In 1861, he formed the decorating firm Morris, Marshall, Faulkner and Co. (later renamed Morris & Co.), which embodied Morris' design philosophy and stood in contrast to the mass productions of the Industrial Revolution. Furniture, wallpaper, carpets, tapestries and other home furnishings, as well as manufactured decorations such as stained glass, carvings, and metalwork established the Firm's reputation as a center for promoting the Arts and Crafts aesthetic in Great Britain and America. 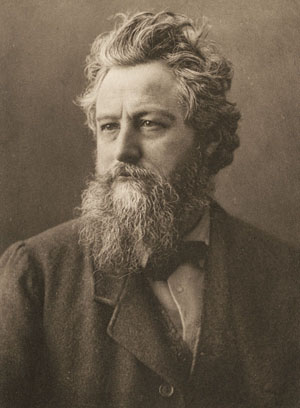 An accomplished writer, Morris penned numerous works of poetry and prose. Some of his publications include: The Defence of Guenevere and Other Poems, The Life and Death of Jason, The Earthly Paradise, Love is Enough, News from Nowhere, and Old French Romances. He also became known for his translations of Icelandic sagas.

In 1890, Morris founded the Kelmscott Press, where he left a lasting influence on the history of typography and book design. He used his own designs for the type and ornamental letters, reviving the art of hand printing. Fifty-two works were printed at the Kelmscott Press between 1891 and 1898 alone, including editions of the classics and Morris' own works. 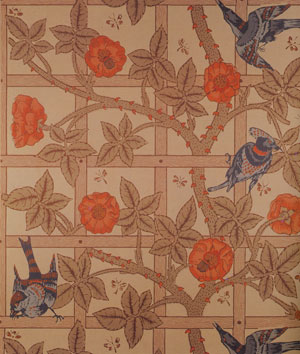 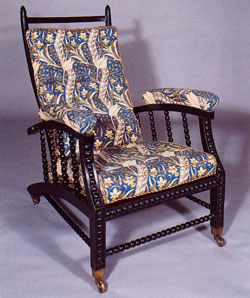 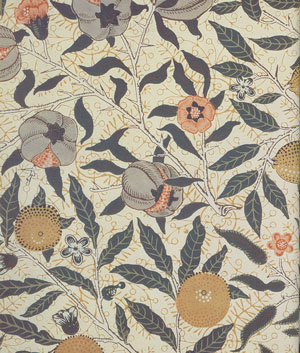 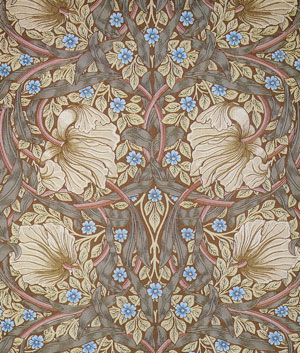 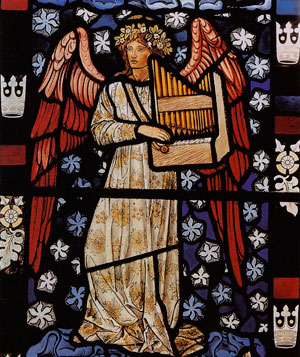 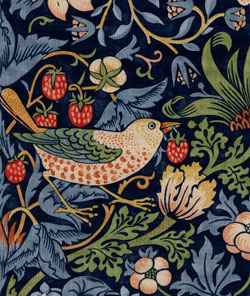 Morris enters Exeter College in Oxford in January 1853, where he first meets Edward Burne-Jones.  During this time, Morris also edits and finances the Oxford and Cambridge Magazine.  Morris meets Phillip Webb while working as an apprentice in the offices of Oxford architect G.E. Street.

After receiving his degree in 1856, Morris moves to London, where he is introduced to Dante Gabriel Rossetti and briefly pursues painting.

The Defense of Guenevere, Morris’s first volume of poetry, published in 1858.

First volumes of Earthly Paradise published between 1868 and 1870.

Morris and his family move into Kelmscott Manor with Dante Gabriel Rosetti in 1869.

Morris takes his first trip to Iceland in 1871.

Morris helps found the Society for the Protection of Ancient Buildings (Anti-Scrape) in 1877.

Morris joins the Democratic Federation in 1883.

Morris, along with Eleanor Marx and Ernest Belfort Bax, leaves the Democratic Federation and forms the Socialist League. Publication of Commonweal begins in 1885.

Morris leaves the Socialist League and forms the Hammersmith Socialist Society in 1890.

News from Nowhere published in 1891.

Kelmscott Press begins production, printing The Story of the Glittering Plain in 1891.

Kelmscott Press publishes The Works of Geoffrey Chaucer in 1896.