Early histories of the Civil War are historical accounts written during or soon after the end of the Civil War.  They often contain detailed accounts of military operations as well as illustrations depicting generals and soliders from the war, as well as scenes from battle. 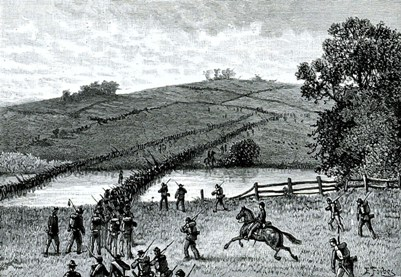 It is important to examine these early histories with a critical eye.  Authors writing so close to the actual events often write with a bias that affects their interpretation of the war.  For example, the causes, strategies, and impact of the war might be interpreted very different by a Southern author, as opposed to an an abolitionist writing from the Northern states.  It is precisely these unique viewpoints of different authors who have lived through the Civil War that provides insight about contemporary attitudes and reinterpretations of the war in the years that follow. 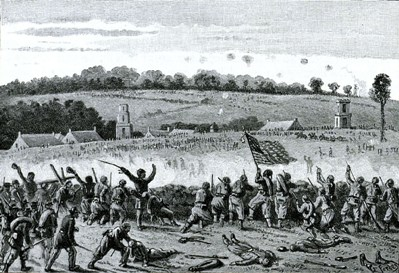 To locate early Civil War histories, you can search the UMD online catalog using the College Park Advanced Search option.  Type "Civil War" or any preferred keyword into the search box using the all fields or notes option.  If you are only interested in titles available in the Maryland Room, you can choose "Marylandia & Rare Books" in the location field.

Then, use the year/s option to specify a date range.  For example, enter the years "1860 to 1875" to view titles that were published up to a decade after the end of the Civil War.

Image: (Top) "General McCellan Riding the Line of Battle at Antietam.  From a Sketch Made at the Time."  Battles and Leaders of the Civil War; Being for the Most Part Contributions by Union and Confederate Officers, Vol. 2, Pg. 648.

Image: (Bottom) "Burnside's Attack Upon Sharpsburg (Battle of Antietam). From a Sketch Made at the Time."  Battles and Leaders of the Civil War; Being for the Most Part Contributions by Union and Confederate Officers, Vol. 2, Pg. 654.

Below is a selection of Civil War histories available in the Maryland Room.  Additional titles can be searched using the online catalog.