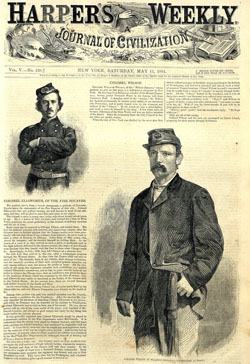 Newspaper coverage of the Civil War often includes details of individual battles and military campaigns, political coverage, illustrations drawn on site or based on photographs, editorials, and eye witness accounts of events.

The Maryland Room has an a variety of Civil War newspapers available on microfilm. Use the list on the right to browse a selection of these titles. For more information on newspapers in the Maryland Collection, visit the Newspapers of Maryland webpage.

In addition to microfilmed and digitized newspapers, the Maryland Collection also contains original newspapers from the Civil War era.  These titles are searchable using the UMD online catalog.  A PDF inventory of the Original Newspaper Collection is also available.  Use the date category to search for titles published between 1861 and 1865.

Some early American newspapers have been digitized and are available to search using Database Finder.  The University of Maryland has also made available a collection of early digitized newspapers as part of the Accessible Archives database.  Titles are searchable by keyword.

For more information using newspapers for your research, visit the interpreting primary and secondary sources guide from the University of Maryland libraries.

There are several Civil War newspapers available on microfilm in the Maryland Room.  The following is a sampling of these titles, followed by the years covered available. Click on a title to view the full catalog record.

The Baltimore News American changed names several times during its publication history, below are the titles for the Civil War era:

Additional historic newspapers are also available in the Periodicals/Microforms room in McKeldin Library, including: