Explore this Libguide and learn more about Pete Seeger's life and works in the Michelle Smith Performing Arts Library. 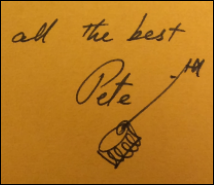 Folk musician, political activist, and environmental advocate Pete Seeger was an inspiration to generations of musicians and artists, and shaped the history of the folk revival in the mid-twentieth century with his patented brand of anthems and sing-a-longs. Seeger's dedication to the preservation of folk music of all cultures made him an icon to performers like Bruce Springsteen, Joan Baez, and Bob Dylan, and his anti-war songs like "Turn, Turn, Turn" (popularized by the Byrds in 1965,) "If I Had a Hammer," and "Where Have All the Flowers Gone?" provided the soundtrack to the tumultuous political environment of the 1950s and 60s.

Born in New York City on May 3, 1919, Pete was the son of influential ethnomusicologist and Yale, Julliard, and UCLA professor Charles Seeger. After dropping out of Harvard in 1938, Pete decided to dedicate his life to folk music; the distress he witnessed among the working classes during the Great Depression inspired him to champion the rights of the ordinary man and woman. Pete continued to use music to fight for social justice throughout his long career, appearing regularly as a solo performer, as well as with Woody and Arlo Guthrie, Lead Belly, and the Weavers. His work with John and Alan Lomax to collect and preserve the folk music of the American South ensured that this music would endure, and his extensive live tours brought folk music to the mainstream consciousness. Pete's death of natural causes at the age of 94 on January 27, 2014 marked the day that American music lost one of its most vocal proponents and most influential figures.

Special Collections in Performing Arts (SCPA) holds several pieces of personal correspondence sent by Pete Seeger to friends and acquaintances throughout his long and illustrious career. These notes and letters concern a variety of subjects that were important to Pete - the education of both children and adults on music that falls outside the western-European art music tradition, the organization of festivals featuring folk music, environmental preservation of the Hudson River, and the promotion of younger songwriters and musicians. Explore this archival material in person by requesting access to the materials and making an appointment to view them in the Lowens Room at MSPAL.