A planned community, or planned city, is a community that was carefully planned from its inception. This guide provides basic information about these communities along with print and electronic resources.

This is a guide to Planned Communities in the United States. The emphasis of this guide is to provide basic information about planned communities, as well as print and eletronic resources that might be helpful to those who would like to learn more about them. Email or phone the subject specialist or author of this guide for more information and assistance. 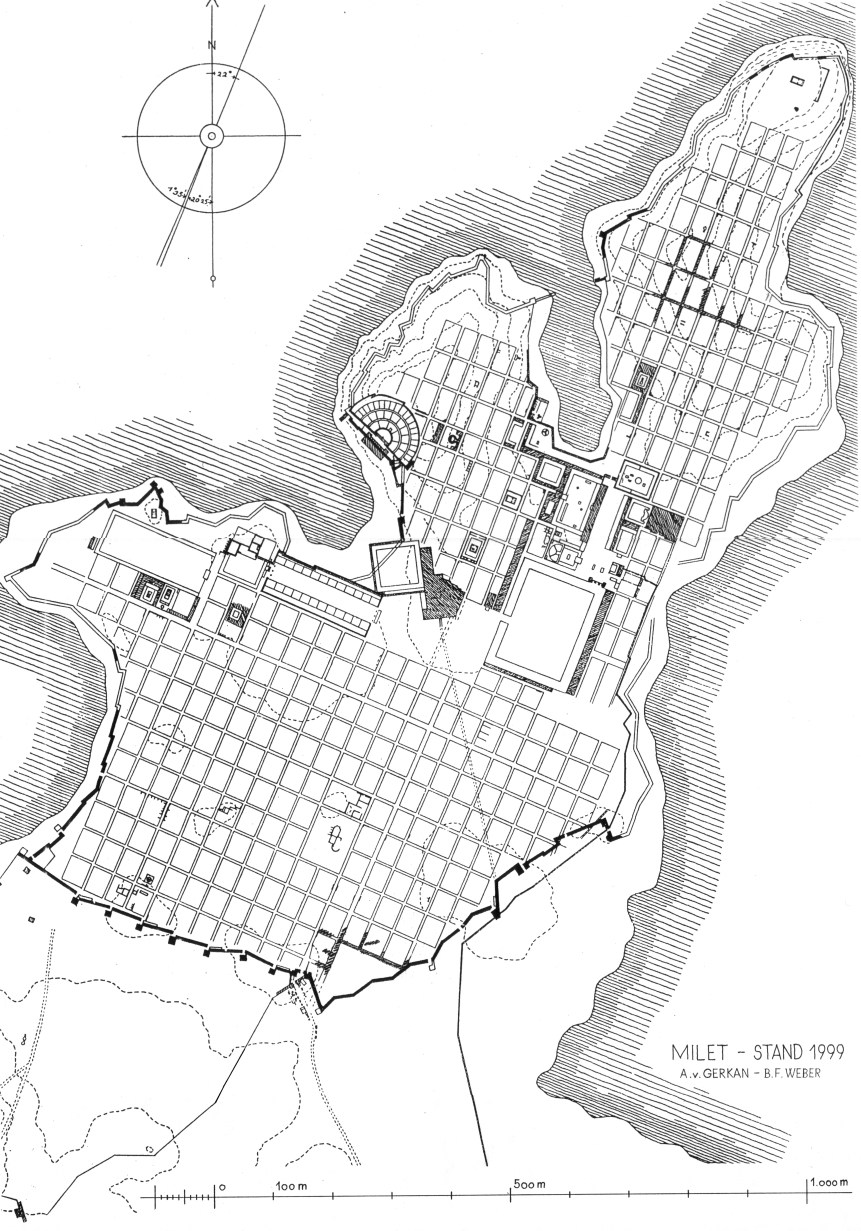 The idea of planning entire communities prior to their construction is an ancient one. According to Greenbelt: History of a New Town, one of the earliest such cities on record is Miletus, Greece, which was built in the 4th century B.C. Throughout the Middle Ages and Renaissance, various planned communities, both theoretical and actual, were conceived. Leonardo da Vinci designed several cities that were never constructed. Following the great fire of London in 1666, the architect Christopher Wren created a new master plan for the city that incorporated park land and urban space. Several 18th century cities, including Washington D.C., New York City, and St. Petersburg, Russia, were built according to comprehensive planning. 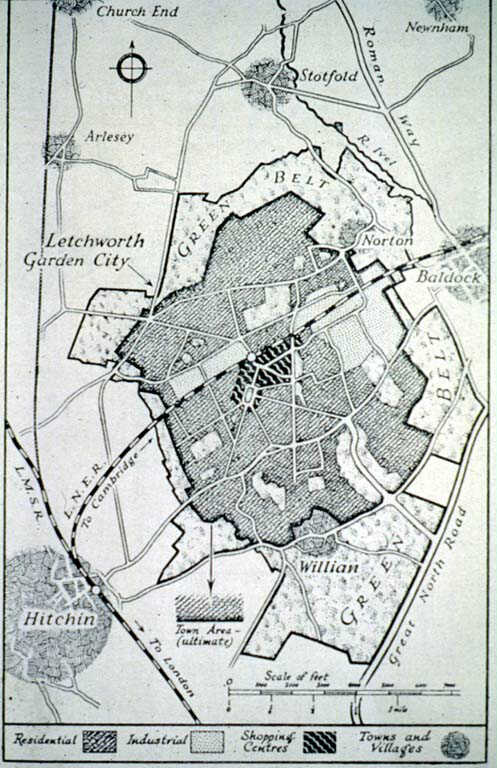 One of the most important planned city concepts, the Garden City Movement, arose in 19th century England as a reaction to the pollution and crowding of the Industrial Revolution. In 1898, Ebenezer Howard published the book To-Morrow: A Peaceful Path to Real Reform in which he laid out his ideas concerning the creation of new towns. Howard believed that these towns should be limited in size and density, and surrounded with a belt of undeveloped land. The idea gained enough attention and financial backing to lead to the creation of Letchworth, in Hertfordshire, England, the first such "Garden City." After the First World War the second town built following Howard's ideas, Welwyn Garden City, also in Hertfordshire, was constructed. 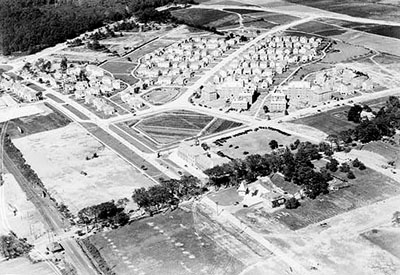 In the early 1920's, American architects Clarence Stein and Henry Wright, inspired by Howard's ideas and the success of Letchworth and Welwyn, created the city of Radburn, New Jersey. Conceived as a community which would be safe for children, Radburn was intentionally designed so that the residents would not require automobiles. Several urban planning designs were pioneered at Radburn that would influence later planned communities, including the separation of pedestrian and vehicle traffic, and the use of "superblocks," each of which shared 23 acres of commonly held parkland. 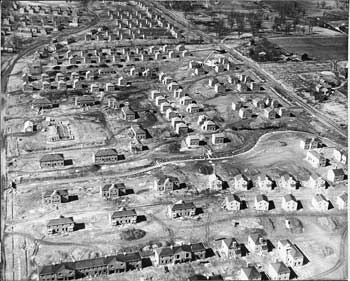 Following the stock market crash of 1929 and the subsequent economic depression, there was great demand both for affordable housing and employment for workers who had lost their jobs. In response the Resettlement Administration, created in 1935 by President Roosevelt, brought about a total of three greenbelt towns: Greenbelt, Maryland; Greenhills, Ohio; and Greendale, Wisconsin. These towns contained many of the elements of the Garden City Movement developments, including the use of superblocks and a "greenbelt" of undeveloped land surrounding the community. 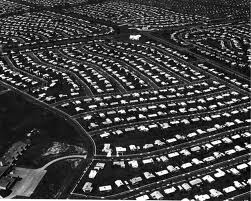 Housing shortages faced many returning World War II veterans. Building materials had been in short supply during the War and residential construction had all but ceased. To meet the demand, enterprising real estate developer Abraham Levitt and his sons decided to build simple, inexpensive, mass-produced houses on a tract of land on Long Island, New York. The Levitts erected the houses quickly, at the rate of 30 per day, but they were still unable to keep up with demand.

Based upon the success of Levittown, Abraham Levitt expanded his building plan from the original 17,447 house community on Long Island to suburban Philadelphia (Levittown, Pa.), Washington, D.C. (Bowie, Md.), and New Jersey (Levittown, N.J.). These communities were criticized for their cookie-cutter design by social critics such as Malvina Reynolds as typified in her song "Little Boxes" (click here for the full lyrics). Despite such criticism, these communities provided much needed housing for returning veterans, and remain touchstones in the history of planned community development. 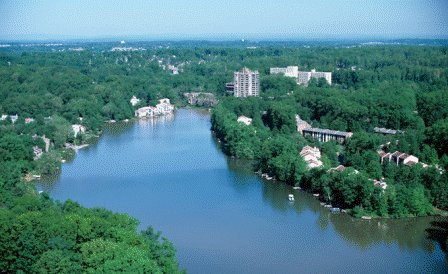 Decades after the demographically driven success of Abraham Levitt's developments, another developer, Robert Simon, planned and built the city of Reston Virginia. Erected in 1962, the city was designed with a number of elements taken from the Garden City movement of the early 20th century including a buffer of parkland surrounding the city and 10 acres of parkland for every 1,000 residents. Simon's goals for the new city included high standards for structural and natural beauty as well as opportunities for living and working in the same community.

Simon's vision for the city was faithfully executed although his goal of financial success for the city was not attained. Ownership of Reston was relinquished to Gulf Oil (later Mobil), one of the largest initial investors in 1967. Today Reston is considered a model utopian suburb and its central plan is a blend of urban activity with country beauty. 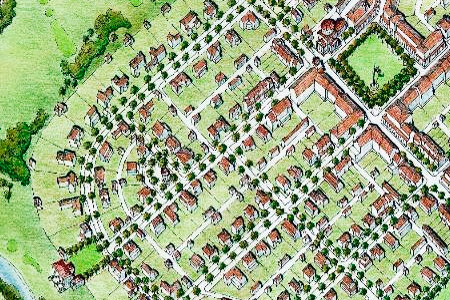 After a period of dormancy, the idea of building idealized communities was re-born in the early 1980s as "New Urbanism." This movement emphasized livable, walkable communities that utilize mass transit and more intelligent use and reuse of previously developed buildings and land. Promoted in large part by the husband and wife architectural team of Andres Duany and Elizabeth Plater-Zyberk (winners of the 2001 Vincent Scully Prize), this movement has caused a readjustment in the way urban planners think of building cities. 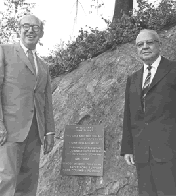 While Reston was being constructed, another developer across the Potomac, James W. Rouse, was planning the town of Columbia, Maryland approximately halfway between Baltimore, Maryland and Washington D.C. Rouse planned the city as a "garden for people to grow in," designed around clusters of villages that attempted to recreate small-town life. Columbia's founders made a conscious effort to encourage diversity among its citizens.

However, due to the vast start up expenses involved in building these towns and slow home sales, Columbia, like Reston, ended up in the hands of its major investor, Connecticut General Life Insurance Company. 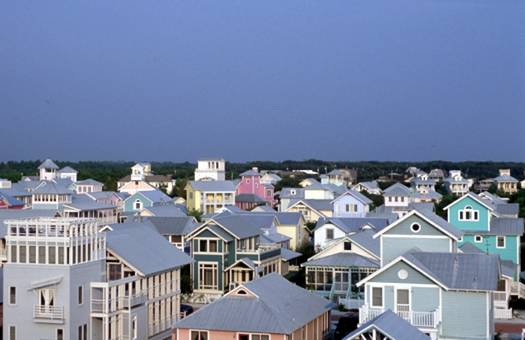 The city of Seaside, Florida was designed, by Duany and Plater-Zyerbeck and was the first such community to be built using New Urbanist ideas. Other communities across the country such as Kentlands, Maryland and Laguna West, California followed shortly thereafter.

Just as its name implies, Seaside is a resort community. It is a relatively small community (80 acres) which is designed to be completely walkable. Although automobiles are permitted, the emphasis of many of the streets is on pedestrians. 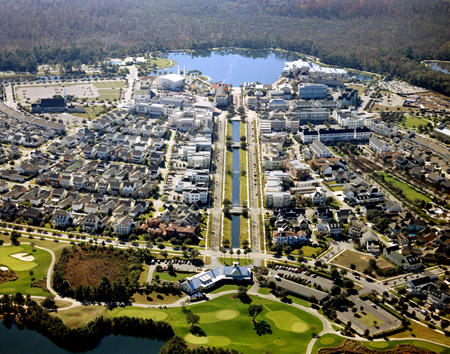 Built in 1994 by the Disney Corporation on the edge of their Walt Disney World property, Celebration Florida is one of the latest "New Urbanist" developments in the United States. Although currently only 3,500 residents live in Celebration, the city is planned for 12,000-15,000 residents. The city is designed, in accordance with "New Urbanist" ideals, with pedestrian friendly streets and walkways and a mixture of commercial and residential space allowing Celeberation's citizens to live and work in the same area.